No Compromise Part One

No Compromise, Part I

8651.1 & 3001.3
"No Compromise, Part 1" was the first issue in the three-part comic story arc No Compromise which was published by DC Comics in 1994. The story was written by Howard Weinstein and drawn by Carlos Garzon. In this story, Commander Pavel Chekov reminisced about a mission that took place in 2267, during Captain James T. Kirk's first five-year mission aboard the USS Enterprise.

Captain's log, stardate 8651.1: Enterprise at Starbase 92 for a brief layover – our first chance for R&R following our time-travel adventure into Klingon history… We are transferring newly-assigned crew to the Excelsior…which gives us a chance to catch up with our old comrade, Captain Sulu.

Commanders Pavel Chekov and Nyota Uhura from the USS Enterprise-A visited Sulu aboard the USS Excelsior. Uhura brought word that a former crewmate of theirs, Julia Crandall, had been killed. She was the only woman Chekov had ever proposed to. Sulu had no memory of her, so Chekov recounted their history…

Chekov and Crandall fell in love during their last year at Starfleet Academy, and he proposed after their graduation, just before they were assigned to different starships. She refused since they might not see each other again. Chekov was posted to the Enterprise.

Captain's log, stardate 3001.3: Enterprise delivering equipment to Starbase 44, undergoing expansion… We also picking up newly-assigned crew members and supplies for our survey mission. We will be the first Federation starship to visit the Mariotian sector.

Letter to his parents, from Pavel Chekov: Dear mother and father, we are about to go on our mission to an unexplored sector – my first as a junior navigator. Yes, I got promoted! I am excited — and a little nervous. My new lieutenant friends, Sulu and Uhura, tell me very few junior officers get such promotions so soon after joining a starship crew. I am sending pictures, and I will write again soon. Love, Pavel.
Captain's log, stardate 3004.6: Our second day surveying the unexplored Mariotian sector…

Crandall transferred to the Enterprise at Starbase 44, but hesitated before telling Chekov, and skipped out on their dinner date, feeling it was too soon for them to get back together. Although he still loved her, she said she had changed.

Captain's log, supplemental: Approaching the planet Beta Mariotia III — the source of the distress signal detected earlier… and it appears our caution was warranted.

They found a massive vessel in orbit bombarding a colony on the surface with high levels of background radiation. A radiation cloud surrounding the vessel blocked sensor scans. The ship ignored hails and ignored a phaser at low power. It deflected a full-power phaser shot, then retaliated by directing turbulence back at the Enterprise whenever the starship got too close.

Captain's log, supplemental: Damage from our last encounter with the alien ship is being repaired, Our shields have been drained, so we're keeping our distance… Unable to stop the radiation bombardment of the planet, we are beaming down to meet with colony leader Veneth, and see what assistance we can offer.

Starfleet would be able to evacuate the 2,000 colonists within a few weeks. But Leonard McCoy assessed that crops and animals were already showing cell damage. Some colonists were already sick from radiation poisoning. Action needed to be taken immediately to save them. 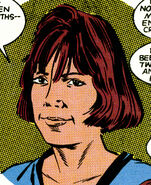 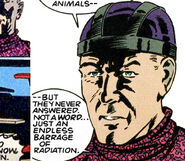