For the TOS novel with this title, see: TOS novel: No Time Like the Past.

3275.2
Captain Kirk sees ancient history — being unmade! — "No Time Like the Past" was a comic book story published by Gold Key Comics in 1978. It was the 17th of 22 stories drawn by Alden McWilliams and the 8th of 10 stories written by George Kashdan.

It is said that the fate of a single blade of grass can influence the future forever! What, then, of the fate of a man, a regiment, an army? For three officers of the starship Enterprise, the answer lay in the dwindling sands of time!

Captain's log, star date 3275.2.
In response to a request from the planet Oorego IV, we are pursuing their deposed dictator, Trengur, who escaped from an insane asylum...

The USS Enterprise follows Trengur to the planet of the Guardian of Forever. Beaming down, James T. Kirk, Spock and Leonard McCoy learn from the Guardian that Trengur is altering history. They pass through the portal, emerging in front of a cave in the mountains in 218 BC. Spock recognizes Hannibal's Carthaginian army, which is traveling through the Alps to invade the Roman Empire. Spock also notices that the army is going the wrong way, and speculates that Trengur has warned Hannibal of hidden Roman troops following them. Quickly, the landing party heads toward the army. Soldiers take them to Hannibal, but Trengur has already become Hannibal's trusted colonel and aide-de-camp. Suddenly the Romans are spotted, and the Starfleet officers are forgotten as the army engages in battle, defeating the Romans. The landing party heads back to the cave, then returns through the Guardian to find out how history has been changed.

Captain's log, star date unknown, (delayed report)
We returned to find the Enterprise and its crew in a completely altered state...

Montgomery Scott, Hikaru Sulu and Nyota Uhura hail their Earthfleet captain aboard the USS Enterprise (NCC-2101). The ship looks familiar, but personnel are wearing different uniforms. History tapes shows that Trengur killed Hannibal, the American Revolution was thwarted, and Adolf Hitler conquered America. By the 21st century, Trengur had taken control of Earth and exiled any opposition. Earth was denied admittance when the Federation formed. Scott laughs at their Starfleet uniforms and suggest they change clothes. As the trio don Earthfleet uniforms, Kirk learns that their assignment was to use the Guardian to infiltrate and place antimatter bombs around key historic Starfleet installations, then destroy the Guardian's planet so that their mission could not be undone. Set to explode in nine minutes, the bombs will forever trap Kirk, Spock and McCoy in the alternate timeline.

When Kirk doesn't immediately order the ship to escape the impending blast radius, Scott becomes suspicious and leads a security team to the briefing room. But Spock is one step ahead and knocks Kirk out with a Vulcan nerve pinch, then lies to Scott about Kirk's condition. McCoy revives Kirk in sickbay, then tells Scott that Kirk has contracted the Bubonic Plague from his travels through time. Scott panics and quickly returns the landing party to the planet.

Moments before the bombs detonate, the three men hastily rush through the portal. They reappear in 218 BC, a bit earlier than in their previous visit. Without weapons, the trio hastily commandeer a war elephant to chase down Trengur and shuffle him away from the army. The soldiers don't pursue, as they just want their elephant back. The four return to the 23rd century and rematerialize in the transporter room of the prime reality Enterprise. Scott is pleased that they retrieved Trengur, but laughs at their strange uniforms.

Kirk and McCoy at the Alps. 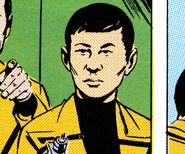 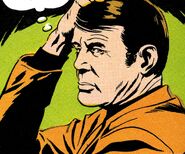 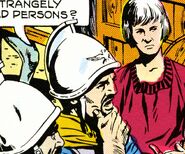 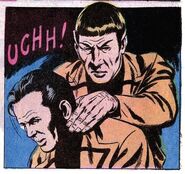 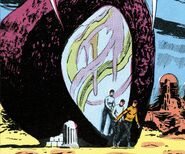 The Guardian of Forever. 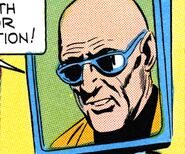 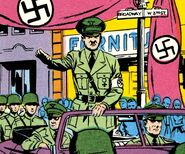 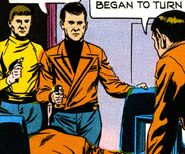 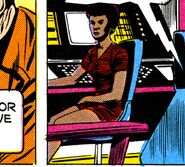