Nobody Knows the Tribbles I've Seen

Nobody Knows the Tribbles I've Seen

Michael A. Martin and Andy Mangels

At Quark's, Bashir, Dax and O'Brien tell the stories of why they think Klingons dislike tribbles. 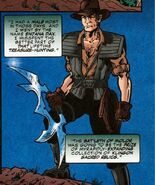