Nor Any Drop to Drink

Nor Any Drop to Drink

Unknown
"Nor Any Drop to Drink" was a Star Trek: The Original Series comic strip published in 1969. It was the ninth story arc in the UK comic strips series, and was released in five parts within issues of TV21 & Joe 90. This was the ninth of 11 stories illustrated by Harry Lindfield.

Teaser, 15 November 1969
In free space flight one moment… the next, submerged in the depths of an ocean! Incredible though it was, it had happened to the starship Enterprise… and utterly baffled Captain Kirk and Mr. Spock who had donned pressure suits to leave their craft and investigate. They found… trouble!

While exploring the Sigma Draconis Group, the USS Enterprise suddenly comes to a complete halt. The vessel has penetrated the dense liquid of a globular planet and experiences a pressure of nearly thirty atmospheres. Kirk and Spock swim out an airlock to look around, but a mammoth sea creature suddenly swallows the captain. Within its airy maw, Kirk is able to fire his phaser, annoy the creature, and be spat out.

They return to the ship, only to discover Sigma fishmen attaching grapplers to the Enterprise. The starship is towed by a submarine toward an undersea city. Kirk and Spock leave the airlock in their pressure suits to make peaceful contact with the natives, but they are captured, brought into the city and threatened with dissection.

Kirk escapes and returns with a raiding party. During the fighting, Kirk captures a freeze gun that generates immense cold and ice around any target. They locate a tank sporting a more powerful gun. After blanketing the Enterprise with ice, their ship begins to rise. The raiding party quickly returns to the ship before it breaks the surface. Deflectors shatter the ice, and the Enterprise launches back into space. 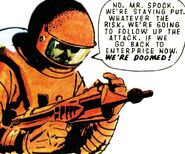 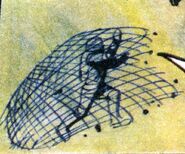 Spock caught in a net.

A submarine towed the USS Enterprise.