unknown
"Nova-Thirteen" was a 12-page Star Trek: The Original Series comic strip. It was the 22nd weekly story arc in the UK comic strips series, published in four installments in TV21 Weekly in 1971. This was the fourth of six stories drawn by Vicente Alcázar and Carlos Pino. In this story, James T. Kirk was asked to retrieve a probe lost on the surface of Nova XIII.

Omnibus teaser
While investigating the disappearance of a robotic spacecraft exploring Nova-Thirteen on behalf of the Trans-Galactic Zoological Federation, a landing party is attacked by giant cyclopean creatures controlled by small, flute-playing aliens.

A probe lands on Nova XIII and releases a robot to examine the local lifeforms. However, it falls into an animal trap and ceases transmitting. As the USS Enterprise had been relaying its signals onward to Earth, they are assigned to investigate. James T. Kirk and Montgomery Scott travel to the surface aboard the Galileo, finding the probe craft wrecked.

Suddenly, Kirk and Scott are attacked by a giant cyclops. Before it grabs them, though, music from a flute-like instrument makes it back away. Scott pulls out his universal translator, but the diminutive flute-playing Nova XIII native knocks it to the ground and damages it. Several more natives and giants approach with bows and arrows aimed at the landing party. Kirk pretends to stumble on the rough terrain and is able to retrieve the translator.

Kirk and Scott are taken to a small township buried within jungle undergrowth and locked in a prison cell. Soon, they are brought before some sort of tribunal, where Kirk suspects they are sentenced to death. Quickly, they flee into the jungle. As flute notes blare, several giants rouse, but Kirk and Scott evade them in the underbrush — a strong smell of nearby plants mask their own scent. They smear odorous succulent juice over themselves before heading toward the shuttle. They manage to get aboard and launch it, narrowly evading the outstretched arm of one of the giants.

The president of the Trans-Galactic Zoological Federation is excited to read their report, but disappointed that they didn't take photos. 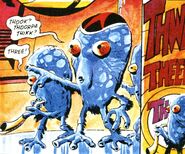 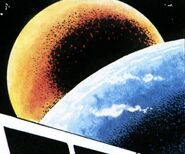 Nova XIII and its moon.