9522.0 & c. 389.4
"Now and Then" was the 15th issue of the Marvel-Paramount Comics series of Star Trek: Early Voyages comics. It featured the conclusion of a four-part arc in which Mia Colt was sent into an alternate timeline.

Colt gets thrown forward in time to an alternate future, and with the help of James T. Kirk, is reunited with a much older Captain Pike and his new crew on the Enterprise. Pike and Kirk realize Mia is disrupting their fragile reality by her continued presence…

Captain's log, stardate 9522.0.
The Enterprise is en route to Algol Two in the hopes of unraveling the temporal mystery behind Mia Colt's reappearance. Mr. Spock conjectures she will die if not returned to her own time and the time-stream itself could be irrevocably damaged if she remains here. Our hopes lie with a mythical Well of Tomorrows on Algol.

As if that were not enough, we have taken on board the renegade James T. Kirk and his band of pirates, the ones who brought Mia to us. Our course has taken us deep into violently disputed territory… and into the sights of a Klingon flotilla.

Captain's log, supplemental…
Captain Robbins, my old number one, is gracious enough to listen as I explain it to her. Mia Colt shouldn't be here. Forces beyond our understanding have displaced her in time and space, and my gut instinct — the one that's served me right for forty years in the fleet — tells me we must do whatever we can to set that right…

Captain's log, supplemental… (2254)
Mia Colt is returned to us, with quite a tale to tell. Her report is to be classified, and a science vessel dispatched to survey the Algol site. None of the other keepsakes tested for the temporal energy, and the one Colt had no longer seems to work. Temporal theory was always my least favorite class at the Academy because it was only theory and conjecture. Now, they have some practical data to study.

But at least, according to the theory anyway, Yeoman Colt has put time back on track, and events will now unfold the way they were destined to… for everybody. 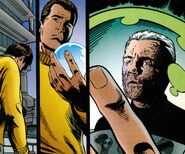 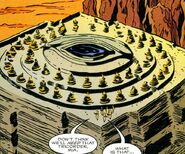 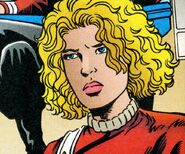