Captain's log, stardate 4410.1
Our mission is to transport an animal from the planet Xanvia to the neighboring planet of Xoxxa. The two planets have only recently concluded a war, generations long, and as a gesture of peace, Xanvia's scientists, pioneers in genetic research, have re-created oban, a species made extinct on Xoxxa by the war. The Federation recognizes oban as a monumentally symbolic token of peace from one former sworn enemy to another. The Enterprise has already made a visit to Xoxxa, which allowed me the unfortunate opportunity to see first-hand the terrible carnage and destruction by the war. The trail of burned-out space junk and ships we pass on our way from Xoxxa to Xanvia serves as a further reminder of the conflict. I must do all in my power to prevent such senseless slaughter from happening again. Beaming down to the planet's surface, my crew and I are acutely aware that we must demonstrate diplomacy and even-handedness at all times.

At Xoxxa, Ambassador Ballal gives Kirk an offering called "the weave". On Xanvia, McCoy gives the animal a clean bill of health. With emotions frayed from a weeks-delayed shore leave, the ship heads back to Xoxxa.

Captain's log, supplemental
After concluding with the Xoxxan president, I decide finally to check this weave out for myself.

Spock describes the weave as a "screen containing empathically reactive microscopic spores which change color and shape. They form images and patterns that reflect the emotions of the person looking directly at it." Also, "the tiny creatures read basic subliminal effect direct from the brain."

Meanwhile, two engineers who squabbled earlier become friendly and relaxed after visiting oban. Scotty explains that the creature "emits very subtle but relaxing pheromones when it purrs." Even Kirk said he felt better after seeing it.

Captain's log, stardate 4412.9
Approximately one Earth day from Xoxxa. I am happy to report no hostile incidents on board whatsoever. Oban has proved to be a surprisingly pleasant addition. Doctor McCoy has recommended that each of the crew spend ten minutes with the animal in order to relax. On a personal note, this captain hasn't felt quite so refreshed for some time. I doubt if any can resist the creature's charms.

Among the crew visiting oban are friends Susan Anderson and Webb. Unnoticed, oban follows them when the two leave to visit the weave. Webb explains that the weave reflects his feelings of unrequited love, but Anderson looks and sees strong anger. They turn to see oban become a large, frightening dragon-like creature. Spock's analysis is that the weave "triggered a violent shift in oban's metabolism." It kills four security men before being stopped by a force field.

Captain's log, stardate 4416.2
The force field is holding oban, but it is obvious that this is not the gift Xoxxa expects delivered. My commitment to maintain the peace dictates that I be economical with the truth. We need more time to investigate. This may not have been a calculated move by the Xanvians en mass, but perhaps the work of a small group or even one man determined to undermine the peace process.

Stalling President Ballal, Kirk meets Spock and Scotty in the briefing room. Spock deduces that the creature is a "sleeper biological weapon." A Xanvian warship approaches and locks weapons on the Enterprise. Its Captain Marin inquires why oban hadn't yet been delivered. Meanwhile, the creature continues to grow.

Captain's log, supplemental
The oban creature's rapid expansion poses too great a threat to the Enterprise. I'm ordering the transport of Oban onto the Xoxxan surface. It is my intention to hand over an incapacitated yet minimally wounded Oban. Once the deception is uncovered, it will be the one sum hope of salvaging peace. Meanwhile, an increasingly impatient Marin hails the Enterprise. Answered by Chekov, currently in operational command. I have every faith in my ensign as future captain material.

Oban is beamed down, but can't be subdued even with continuous phaser fire.

Kirk attaches the weave to a phaser set on overload. Oban eats both. The phaser detonates and ignites gas within the creature, generating an enormous explosion of fireworks visible over the horizon.

Back aboard the Enterprise, Kirk accuses Marin of sabotaging the peace mission. The creature has killed eight members of the crew. Kirk said he will not fire on Marin's ship, to keep the peace.

The Enterprise also dealt with a fragile peace in: 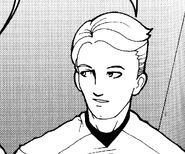 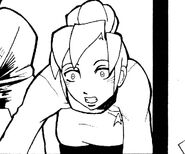 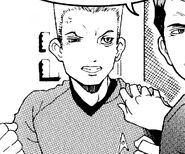 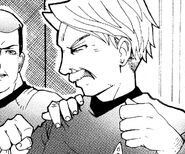 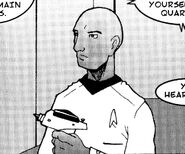 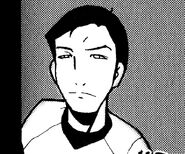 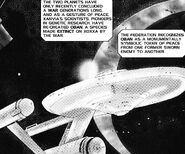