For other uses, see Odyssey's End.

7909.8
Close encounters! – "Odyssey's End" was the final issue of the TOS Untold Voyages miniseries published by Marvel Comics in 1998. The story takes place near the end of Captain Kirk's second five-year mission. In this story, the crew considers their future while encountering a flying saucer.

The Enterprise's second five-year mission comes to an end. On their way home, the Enterprise answers a distress call from the Yorktown, now a Starfleet Academy training vessel, which has been attacked by a huge alien vessel. Kirk, Spock, and McCoy are abducted by the alien lifeforms, little grey creatures with large eyes. The Abductors are telepathic, communicating with Spock, who learns their startling history and current mission. Kirk averts a disaster and reevaluates his own role in Starfleet as a result of the close encounter.

Captain's log, stardate 7909.8
After five years, our mission of exploration aboard the refitted starship Enterprise is finally coming to an end, and we will soon begin the long voyage home to Earth.

At the moment, however, a reception is underway on the recreation deck to celebrate a very special occasion...

Security Chief Pavel Chekov has been promoted to the rank of lieutenant commander, and will be leaving the fold to join the crew of the USS Reliant...

... Where he will serve as first officer.

Captain's log, stardate 7910.1
We have received a distress signal from the USS Yorktown, in the Lycos system. The Enterprise is the closest starship to that sector of space...

... So we have altered course and increased speed to get there as quickly as possible.

Captain's log, supplemental
I have led a landing party over to the Yorktown, where we are now beaming her survivors over to the Enterprise for medical attention.

On the bridge of the crippled vessel, I hope to find some answers...

Captain's log, stardate 7911.2
The Abductors have agreed to avoid entering Romulan space, now aware of the dire consequences that such an action could have on the galaxy. Before we return to the Enterprise, these ancient and mysterious aliens have granted us a guided tour of their enormous and magnificent vessel.

Captain's log, stardate 7911.8
Much like the Abductors, we too have begun the voyage home. In our sickbay, the survivors of the Yorktown are all recovering nicely. The Yorktown herself, however, has been retrieved by Starfleet and is scheduled to be decommissioned. On a more personal note, I have had another conversation with Admiral Morrow, which has led me to a momentous decision.

the galaxy
Referenced only
Spacedock

thousands of years ago

20th century and others 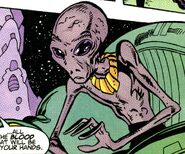 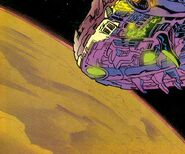