3479.9
"Of Woman Born" is the lead story in the eleventh issue of John Byrne's Star Trek: New Visions comic series. It was published in May 2016 and features Lieutenant Carolyn Palamas in a sequel to TOS episode & novelizations: Star Trek 7, Who Mourns For Adonais?.

A god cannot die, and a story never truly ends. Dr. McCoy confronts Captain Kirk with a staggering discovery—Lt. Carolyn Palamas is pregnant with the child of Apollo. Or is she? Find out in "Of Woman Born", courtesy of photomanipulator extraordinaire, John Byrne.

While performing a routine examination of Carolyn Palamas less than seven hours after her encounter with Apollo, Leonard McCoy finds indications that she is pregnant, then all evidence disappears. Because the nature of demigod reproduction is unknown, additional tests are ordered to asses any potential threat to the USS Enterprise. Before they are started, however, the ship begins behaving strangely: turbolifts collide, systems toggle on and off randomly, warp drive sporadically engages. Spock finds his mind being probed and deduces that a child has indeed been conceived: a non-corporeal entity which has integrated itself with the ship and dematerializes Palamas.

Spock proposes to mind meld with the entity, and is strapped down in a radiation-shielded isolation ward for his own protection. In his meld, he finds a phantom of Palamas, and by mind melding with her is able to enter her reality and establish contact with the entity. By melding with it directly, Spock restores Palamas to the ship. Shortly afterward, she emerges from the isolation ward with a newborn human infant.

Palamas disembarks to the USS Constitution, which will take her and her child to Earth Colony 9, which has the best medical facilities in this region of space.

Captain's log, supplemental...
With only one chance to escape the clutches of the being called Apollo, all hope lies in the loyalty of Carolyn Palamas. A woman who believes herself to be in love with this self-proclaimed god.

Captain's log, stardate 3479.8...
Survey completed of planet Pollux IV. No further sign of... gods. However, Dr. McCoy has summoned First Officer Spock and myself to sickbay with some disturbing new information.

Captain's log, stardate 3491.6.
Rendezvous with USS Constitution for transfer of Lt. Carolyn Palamas and her baby to Earth Colony 9. I am, of course, sorry to be losing a good officer... but for Lt. Commander Montgomery Scott, the parting is even more bittersweet. 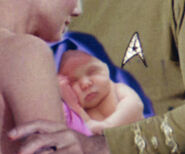 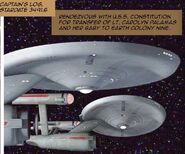