VHS teaser
The crew of the USS Enterprise returns to a fantasyland planet they once visited for shore leave. But this time the world seems to have lost its charm. This episode is a sequel to the original Star Trek television episode "Shore Leave". 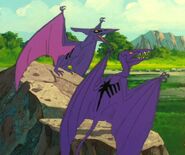 Retrieved from "https://memory-beta.fandom.com/wiki/Once_Upon_a_Planet?oldid=659975"
Community content is available under CC-BY-SA unless otherwise noted.