One of Our Captains Is Missing!

One of Our Captains Is Missing!

Kirk is stranded on a savage planet in "One of Our Captains Is Missing!" — "One of Our Captains Is Missing!" was a comic book story published by Gold Key Comics in 1976. It was the debut of Alden McWilliams as artist on the series. In this story, Captain Zarlo assumed temporary command of the USS Enterprise in the year 2266 while James T. Kirk was given an undercover assignment.

Captain's log, stardate 19.29.13.
I was working out in the ship's gym when the message was received!

James T. Kirk is relieved of duty, bidding farewell to his crew as Captain Zarlo replaces him aboard the USS Enterprise. Kirk reappears a few days later disguised as a Kafrian in a bar on Mobita, where a barfight lands him in jail. However, this is all so that Mobian Prime Minister Aado can meet privately with Kirk, who had worn the disguise to avoid breaking the non-interference directive. Starfleet had assigned him to investigate the Togota, a tribal species that recently began a rebellion with highly advanced weapons — weapons suspected of being provided by the Klingon Empire.

With Aado's help, Kirk is disguised as a Togota, but he can only watch from a distance, as the mute humanoids communicate via telepathic illusions. Kirk takes photos in the jungle of Klingons teaching marksmanship to the Togota, but he is caught by a Klingon commander and brought before chieftain Mwipi. To judge his truthfulness, Kirk is sentenced to a trial by combat with a muscled Togota.

Captain Zarlo's personal log, stardate 19.29.24.
Ship's crew still continue to reject me! My complements to the personal charms of Captain Kirk—wherever he may be!

The large Togota fights not only with a sword, but by creating illusions of threatening animals. Kirk gains the upper hand and departs from the tribe with a warning to Mwipi of what the Klingon Empire has done to countless worlds.

After returning to the village, Kirk publicly accuses the commander of lying. To determine who is right, Mwipi makes the two captains fight each other. Eventually Kirk beats the commander, who then sends a signal to his orbiting D7-class battlecruiser to bomb the jungle, erasing all evidence of Klingon involvement. Luckily, the Enterprise receives a message that Kirk is in trouble, diverts to Mobia, and chases away the battlecruiser.

Days later, Mwipi and Aado reconcile, and peace returns to the planet. 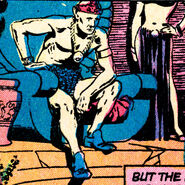 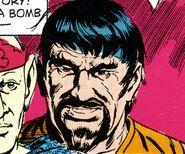 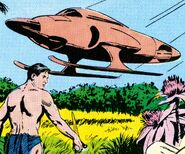 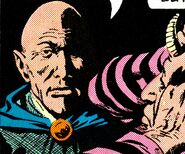 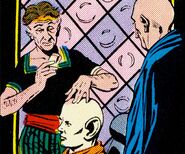 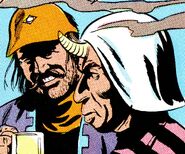 James T. Kirk as a Kafrian.