One of a Kind

One of a Kind

361.6
Welcome to Nano's homeworld. Is Liria burning? — "One of a Kind" is a TOS comic published by Marvel-Paramount Comics in 1997, the ninth issue in the Star Trek: Early Voyages series, set during Christopher Pike's captaincy of the USS Enterprise.

Communications officer Nano is recalled to his homeworld of Liria — a tragedy has occurred, killing several of his people, and Nano is needed to restore the delicate population balance.

Nano receives a priority message from Starfleet Command, informing him of a crisis that requires him to resign his commission.

Captain's log, stardate 361.6.
The Enterprise is en route to Liria. I think I can speak for the whole crew in expressing our sadness at Nano's impending sacrifice. In his own quiet, subtle way, he has made a big impact on us all... he will be missed.

Captain's log, supplemental.
We have achieved standard orbit above Liria. I've always wanted to visit this ancient and notoriously reclusive culture... I just wish the circumstances were happier. I have given permission for Lieutenant Nano's bridge crew colleagues to accompany us to the surface. having his friends see him off is the least I can do.

Pike, Spock, Sita Mohindas, and José Tyler beam down to Liria with Nano and meet Adjunct Koda, Speaker of the Lirin Unity, who allows the landing party to do some sightseeing. Nano trains with Vora to relearn telepathic skills that he'd not needed to use while offworld, but his talents have atrophied, and he struggles to levitate a pillar. When he suddenly releases the huge rock, Pike and Spock disintegrate it with phasers.

Tyler and Mohindas visit a garden on the city's outskirts and meet a groundskeeper. He seems afraid of them, and a large fire spontaneously erupts in the garden. Mohindas knocks Tyler out of the way, but the groundskeeper is caught in the flames and burns to death. Later, she tells Pike it didn't feel like a freak accident — she saw a face in the flames. Tyler didn't see the face, but agreed that the fire's movements seemed unnatural. Nano's people are pyrotechnics, naturally able to create and manipulate fire, and Mohindas wonders if there's a connection.

Nano confesses to having difficulty adjusting to his new life, particularly since he was bred specifically to be an offworld explorer. He also senses something preventing his mind from joining the Lirin Unity, as well as a general fear among the Lirin. Before he resigns from Starfleet, he asks if the landing party will help him investigate.

To increase Nano's telepathic ability, Tyler connects him to a psionic amplifier. It works, allowing him to reach the Unity, and also to sense a darkness within their shared subconscious, a previously unknown aspect of the Unity. Spock theorizes that Lirin xenophobia has been manifesting as a pyrotechnic force. Koda barges into the room, demanding they stop, as they are violating their species's privacy. The creature reappears, and Nano explains to Koda what it is. Pike and Tyler shoot it, but it is impervious to phasers. Quickly, Mohindas hurls the amplifier at it, creating a feedback loop that disperses it.

Nano tells Koda it will keep haunting them until Lirin confront their fears of the unknown. Koda agrees to allows a Federation science vessel to continue the investigation. Nano is allowed to return to the Enterprise, with an amended mission to periodically return and share his offworld experiences.

Centuries ago
A pyrotechnic force first forms within the Lirin Unity's shared consciousness.
~ 2224
Rajiv Mohindas leads the Federation's first contact with the Lirin. (30 years prior to the story)
Nano is created to serve as envoy. (30 years prior to the story)
2230s, 2240s, or 2250s
Liria joins the Federation.
2250s
Moves-With-Burning-Grace, Cusack, Gabrielle Carlotti, José Tyler and Nano pose for a baseball team photo. (Nano has the memento in the story, taken before Cusack's death in "Our Dearest Blood")
2254, stardate 361.6
Nano is recalled after an accident kills several Lirins. 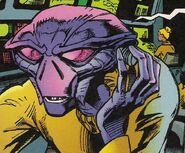 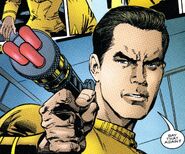 Christopher Pike at the firing range. 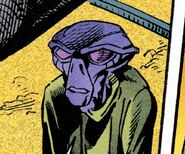 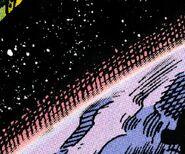 A city on Liria. 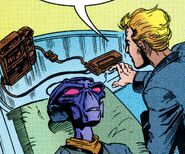