The Taurus Reach is in turmoil.

With tensions mounting between the Federation and the Klingon Empire, Ambassador Jetanien works frantically on Starbase Vanguard to halt the escalation toward war. Commodore Diego Reyes, the station's former commander, awaits trial for treason, while the shattered mind of his intelligence officer, T'Prynn, becomes the battlefield in a fight for her very life.

But even as matters deteriorate, the discoveries made in the Taurus Reach have attracted one of the Federation's most promising scientific minds: Doctor Carol Marcus believes she is close to solving a puzzle that will transform her life's work. Meanwhile, an unexpected defection brings a new perspective to the investigation, and Vanguard's Lieutenant Ming Xiong is confronted with an artifact that could be the key to decoding the Taurus Meta-Genome.

With Operation Vanguard teetering between its greatest breakthrough and a conflict that could engulf two quadrants, its future may depend on the man Starfleet has selected to replace Reyes as base commander: Admiral Heihachiro Nogura.

Klingon commander Komoraq attacks and annexes the planet Lerais II, forcing the Federation colonists to leave or be killed. He soon begins investigations Shedai technology there using a captured Tholian computer expert, and the mysterious artifact delivered by Ganz. The planet provides few breakthroughs so they relocate to Mirdonyae V.

While the Vanguard JAG office prepares for the court martial of Commodore Diego Reyes, the Klingons demand his extradition through diplomatic channels, holding him responsible for the deaths of Klingons on Gamma Tauri IV. Events in the Taurus Reach have brought the Klingons and Federation to the brink of war.

The USS Endeavour, with Ming Xiong aboard, is surveying the former location of the Jinoteur system and finding only empty space. Heading back to Vanguard, the ship encounters three Klingon ships which try to provoke the captain into firing upon them but Captain Khatami manages to outwit them without opening fire. Not long after arriving at the station, a Tholian shuttle being attacked by other Tholian ships enters Vanguard's sensor range. The shuttle is piloted by Nezrene, commander of the Tholian crew rescued from Jinoteur by the USS Sagittarius. The Endeavour rescues Nezrene and chases away the Tholian vessels. Nezrene goes to work with Xiong and Carol Marcus in researching the Shedai technology since her physiology allows her to use its biometric interfaces to mind-link and control the machinery.

The USS Lovell takes Xiong and Nezrene to Erilon to work with the Shedai technology there. Nezrene is easily able to navigate the planet's systems but without the Jinoteur carrier wave signal, the sector wide network is disconnected. The Lovell comes under attack by Tholian vessels. As the vessels enter formation to create a web, Klingon ships enter orbit, destroy the Tholian ships and attack the Lovell. The landing party is beamed aboard as the Lovell flees but Xiong is captured by the Klingons and taken to Mirdonyae V by Komoraq.

Freed of his debts, Cervantes Quinn leaves Vanguard to do some soul searching. Meanwhile, Timothy Pennington joins Doctor M'Benga in taking T'Prynn to Vulcan to seek help from healer Sobon since she has yet to revive consciousness. Sten's katra is eventually driven from T'Prynn's mind through the efforts of Sobon and T'Prynn's sister T'Nel. After she awakes, T'Prynn apologizes to Pennington for the damage she has done to his life and he accepts her sincere apology. Soon afterward, T'Prynn disappears before she can be arrested by Starfleet security.

Rear Admiral Heihachiro Nogura arrives to take command of the station and immediately gets to work as does Captain Mosh zelev Sereb, a Tellarite lawyer assigned to head the prosecution against Reyes who has never lost a case. With his arrival, Rana Desai is then allowed to switch sides and defend Reyes, who is also her boyfriend.

Reyes' trial begins with the charges against him being willful disobedience of a superior officer, releasing classified intelligence data to unauthorized personnel, and conspiracy in the second degree. Reyes pleads guilty to willful disobedience but not guilty to the other charges. The defense concludes its case with Reyes on the stand arguing that Starfleet was wrong to put keeping secrets ahead of the safety of its people. He says, "I swore an oath to defend Federation citizens and that duty comes before any other rule or regulation. If that's changed, for whatever reason, then I'm in the wrong business." His concluding words are, "If the price for protecting the people we've sworn to defend is my head on a platter, then take it. Take it, and jam it down whoever's throat you have to back at headquarters, and make them listen. If this circus can't even accomplish that, then do me a favor, and either throw me in a hole or out an airlock right now. I don't want any part of an organization that can't understand how badly we've turned everything out here into a pile of shit."

Reyes is found not guilty of conspiracy but guilty on the other charges. He is stripped of rank and sent to the Starfleet detention facility in New Zealand for 10 years followed by a dishonorable discharge. En route, Reyes' transport is destroyed by a pirate vessel under contract of General Chang through Zett Nilric, an assassin in Ganz's employ.

Xiong is put to work by Komoraq in researching his captured Shedai technology. He is given access to the artifact sold to the Klingons by Ganz which is a large head-sized crystal with a glowing core. It fills individuals with a sense of fear and evil when they come into its presence. When plugged into a Shedai interface, the crystal powers the planet's systems and gives the Tholian operator complete access where he finds a map showing thousands of pieces of Shedai technology seeded throughout the sector.

The Wanderer, one of the few Shedai capable of interstellar movement without Shedai Conduits is searching for more of her kind while being taunted by the Apostate. When the crystal is activated, she becomes aware of a planet suddenly destroyed by Shedai technology and is overcome with fear by a strange new presence that quickly fades.

The USS Lovell is discharged from Vanguard's command to be replaced by the frigate USS Ahkiel. Nogura receives a report from the Sagittarius that a planet in the Aleriq system has been destroyed by Shedai technology.

The Endeavour rescues Xiong along with the crystalline artifact and escapes. As the ship flees, the Wanderer arrives and blows up Mirdonyae V in an effort to destroy the mysterious Voice. Komoraq's ship is destroyed and the Klingons blame the destruction on Starfleet.

Ambassador Jetanien comes in contact with a Romulan diplomat named D'tran and comes up with the idea of setting up a Federation-Klingon-Romulan diplomatic mission on Nimbus III.

A year later, in 2267, Vanguard comes under attack by a Klingon fleet. As the attack begins, the concluding events of the TOS episode: "Errand of Mercy" take place and the Organians prevent the battle from occurring. Aboard the lead ship, Commander Kutal is angered and discusses this sudden development with a prisoner of his- Diego Reyes. 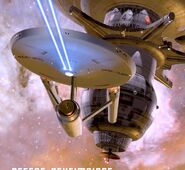