This article is about the TOS episode and novelization. You may be looking for the IDW TOS comic story, Operation: Annihilate.

The USS Enterprise approaches Deneva. Captain Kirk is concerned; Uhura has been unable to contact any transmitter on the planet. Spock's research has revealed that a pattern of mass insanity has been spreading in a straight line through this part of the galaxy, and Deneva is next.

Sulu picks up a ship on sensors. The small craft is on course directly for the Denevan star, and does not appear to be out of control. Kirk orders a warp 8 interception course. The ship is out of range of the tractor beam; the Enterprise pursues. Finally, they make contact: seconds before the ship burns up, the pilot cries out "I did it! It's finally gone! I'm free!!".

Kirk forms a landing party consisting of him, Spock, McCoy, Scotty, Yeoman Zahra and Bobby. Once on the planet, they are struck by the curious lack of people; in a city of 100,000 people, no one is visible – until, a few minutes later, they are attacked by four men who, even as they charge, scream "Go away! We don't want to hurt you!" But, with their crude clubs, they try anyway, forcing the landing party to stun them, an attitude inconsistent with their actions. Then McCoy discovers that the unconscious mens' nervous systems are violently active – as if they're somehow still being stimulated.

A scream draws them next to Kirk's brother's lab. Captain Kirk's brother, Sam, lies dead on the floor. Aurelan, Sam's wife, is hysterical, and their child Peter is unconscious nearby. Evidence suggests something has been trying to force its way in, despite the fact that the sensors showed nothing on Deneva that didn't belong there.

Aurelan, in terrible pain, tells Kirk that "things" came, eight months ago, on a ship from Ingraham B. As she tries to answer Kirk's questions, she experiences more and more pain, until McCoy is forced to sedate her. The creatures use the Denevans as their arms and legs, and are forcing them to build ships. They control their hosts with pain. Aurelan's last act is to implore Kirk not to let the things go any further; this effort costs her everything she has left, and she dies.

Kirk rejoins the landing party; he knows there is some sort of creature present, but the landing party has not yet discovered anything beyond a curious buzzing. Entering a building where they heard this sound, the landing party discovers strange creatures. Looking like little more than loathsome blobs of jelly, they emit a bizarre buzzing noise, and employ a crude, wingless flight. A phaser at force 4 – sufficient to destroy most organisms – barely affects these creatures, even after several seconds of exposure. And the creatures do not register on Spock's tricorder.

Kirk orders the landing party out of the infested area; as they leave, a creature strikes Spock, leaving a strange puncture wound. McCoy removes a small strand of tissue, and then, over Nurse Chapel's objections, he closes the wound. The creatures attack by stinging; they leave behind a piece of this tissue that rapidly infiltrates the victim's entire nervous system, far too completely for conventional surgery to remove it.

Spock recovers consciousness, charges out of sickbay and storms the bridge. His goal: to take the ship out of orbit. Spock is ultimately overcome and returned to sickbay, where McCoy makes another grim discovery. The K3 indicator, a measure of pain, is very, very high. The reason for the madness is confirmed: victims are in such agony that their minds eventually break under the stress. Spock, recovering consciousness, now claims the ability to control the pain. But after his visit to the bridge, Kirk isn't sure.

Spock, conquering the pain, breaks out of sickbay and plans to visit the planet's surface. Scotty, acting on Kirk's orders, refuses to transport him. A scuffle breaks out, and when Kirk appears, Spock explains that his plan is to retrieve a creature for study. He believes that since his nervous system is already infiltrated, there is little more the creatures can do to him. Kirk is convinced, and over McCoy's objections Spock beams down to collect a creature for study.

Spock returns with a creature and begins to study it. Immediately, he realizes that the creature resembles, more than anything, an enormous brain cell. Kirk catches on immediately: these creatures aren't separate animals, they're all parts of a single entity, connected in some mysterious fashion. This is how it resists phaser fire: each part draws strength from the whole.

McCoy's efforts to find some method to kill the creatures fail. Not heat, not radiation - nothing kills it. Kirk knows that if they can't find a way to kill these creatures, he will be forced to destroy Deneva to prevent their spread. A million people will die if nothing can be done. Kirk cannot let the creatures spread, and has no wish to kill the Denevans, including his nephew. He demands a third alternative.

The key lies in exploring the properties of the sun. The Denevan was free of the creature moments before he died; something in the sun killed it. It's not radiation, it's not heat – could it be light? Kirk thinks it is. McCoy rigs a test cubicle, puts the sample creature inside, and confirms the theory: high intensity light is fatal to these creatures. Spock enters next; it's necessary to see what will happen to tissue that has infiltrated a victim. Spock volunteers to enter the cubicle. This test, too, succeeds: the blinding light frees Spock of the creature and the pain – at the cost of his eyesight. Spock, exiting the cubical, remarks that it is an equitable trade – the closest he comes to revealing how much pain he has been experiencing. And then the true tragedy is revealed: lab tests indicate that the creatures are vulnerable only to a specific subset of the light spectrum: ultraviolet light is its Achilles heel. McCoy is chagrined to realize that Spock need not have been blinded at all.

Despite this, the answer is at hand. Kirk orders satellite control to deploy a formation of 210 ultraviolet satellites at 72 miles altitude, in a permanent orbit. The satellites are turned on; the creatures begin to fail, to fall, to smoke and to die. Ground stations on Deneva quickly make contact; the creatures are dying everywhere.

Spock returns to the bridge; he can once again see. It seems that an inner eyelid, an hereditary trait of Vulcans, protected his eyes automatically. 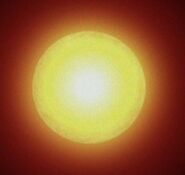 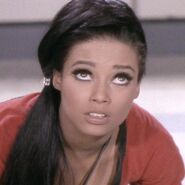 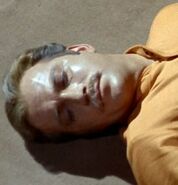