It began as a petty, almost laughable crime... but behind it was a foe whose cunning and treachery would swiftly lead the galaxy to the brink of war!

Captain's log, stardate 3504.7.
While exploring a neutral sector near the Klingon Empire, sensors have picked up rare but familiar emanations.

Detecting dilithium crystals on a class M planetoid in neutral territory near the Klingon Empire, James T. Kirk, Spock and Leonard McCoy beam to the surface to investigate. Quickly they are ambushed and stunned by three Klingons, but the landing party overcomes them and follows a path toward a gathering. They arrive just after natives sign a mining treaty with a Klingon warship commander. The Klingons pay in gold bars and then transport to the IKS Ectacus with a case of sample dilithium. But Spock's tricorder reports that the material is in a state of flux, indicative of unstable synthetic dilithium, and nearby is an Earth human reading. Pulling the hood from the native's Grand Qaal exposes swindler Harry Mudd.

Captain's log, stardate 3504.5.
We have suddenly found ourselves enmeshed in one of the biggest swindle-schemes in the history of the galaxy.

Mudd confesses that he acquired the fake dilithium cheaply from a scientist who knew it had no value, then set himself up as the leader of Eulus expecting Klingon patrol ships to visit. He tosses a keepsake crystal near Kirk, and it blows up. Mudd is shocked — unaware that manufactured crystals are explosive. The case of sample crystals are capable of destroying the Klingon battlecruiser, which could spark a war. Spock uses his communicator to warn the Klingons, but they don't believe him.

With Mudd under McCoy's supervision, Kirk and Spock hope to retrieve the samples, so Montgomery Scott beams them into a hold aboard the Ectacus. But Mudd manages to warn the Klingons, and the commander apprehends Kirk and Spock. Before they can be interrogated, however, Spock explodes a crystal against the hull, and in the ensuing confusion, the two officers escape back to the Enterprise.

Meanwhile, Scott has lost contact with McCoy. The natives subdued him, and now he's a prisoner aboard Mudd's transport. Mudd hopes to abandon McCoy on an uncharted asteroid, but the Enterprise tracks and seizes the ship with a tractor beam.

Later, Scott uses the transporter to return Mudd's gold to the Ectacus, and the commander admits that he's disposed of the dangerous crystals. Mudd denies that conning Klingons is a Federation crime, but Kirk cites kidnapping and jeopardizing starship personnel as charges worthy of placing him in the brig. 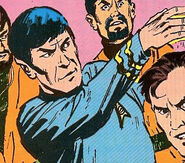 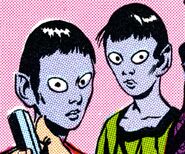 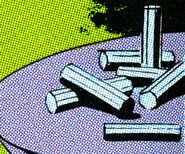