16 October 2017
The Origin of Data is an addendum to The Next Generation's miniseries, Mirror Broken, set in the mirror universe.

In the otherdimensional Mirror universe there is no United Federation of Planets, only a cruel Terran Empire, where advancement comes through assassination, brutality is commonplace and kindness is a weakness. The Terran Empire is on its last legs in its war with the Klingon-Cardassian Alliance, but Captain Jean-Luc Picard has learned of a final chance for victory: a revolutionary new Galaxy-class starship that could turn the tide of the war. The ship is called Enterprise. And Jean-Luc Picard intends to take it. On the eve of the theft, Picard's science officer and co-conspirator, Lieutenant Commander Data, considers his loyalties... 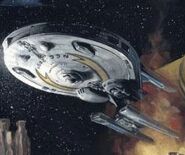