For other uses, see Orphans.

5268.7
"Orphans" is the last of five Star Trek: The Original Series manga stories from the 2006 anthology Shinsei Shinsei (New Life, New Star), published by TokyoPop, with story by Rob Tokar and art by E.J. Su. In this story, the Enterprise fights a large group of mechanoid raiders.

Captain's log, Stardate 5268.7
The Enterprise is escorting a cargo freighter to Lowaria, a non-militaristic planet that has become a favorite target of alien raiders. The Lowarians believed that a Federation starship would make the raiders keep their distance. I expected otherwise… but I never expected a sight like this.

The Enterprise and Lowarian freighter are surrounded by about 20 large, humanoid-shaped fighter craft called Haarkos mechanoids that try to incite combat by giving them the finger. James T. Kirk chooses not to fire, seeing that the pilots are immature. But taunting prompts the freighter to fire, which triggers a power feedback that overloads systems on the Enterprise and knocks out all power on the freighter. Mechanoids start crawling over both ships. Hikaru Sulu fires phasers on the mechanoids on the freighter. Kirk magnetizes the hull then reverses hull polarity to jolt them off the hull. Before being thrust off, Haarkos Alpha is able to stab a sword through the viewscreen. Alpha then aims a large weapon at the ship, forcing Sulu to fire and disable it. Kirk has the transporter room rescue the pilot of the damaged ship. A photon torpedo scatters the remaining raiders, leaving one, Haarkos Beta. They also beam up that pilot and destroy his ship, discovering the pilot to be a kid.

Captain's Log, Supplemental.
The crew of the Lowarian freighter is safely aboard the Enterprise, and we are towing the ship back to its home planet. Damage control teams are making repairs, but the bridge is going to have to wait until more critical systems are finished. I've called a briefing with my senior staff, Representative Melkor, and Lowarian freighter captain Lladash to plan our next move.

Melkor describes the history of the Haarkos. They were a remnant military force set up by the Uljwhan Imperial Territory. Students' DNA were altered so it was impossible to know where they came from. The dissolution of that empire freed Loweria. Before the Haarkos could be disbanded, most of the pilots stole their ships and struck out on their own, attacking helpless planets. Loweria had no military and were an easy target. Kirk realizes that, worse than being enemies, the Haarkos were orphans.

Captain's Log, Supplemental.
Scotty and Spock are studying the Haarko's mech. Dr. McCoy is analyzing the pilot's interface suit. Sulu and Chekov are reviewing the Haarko's fighting style and Uhura is examining the Haarko's communications. I… want to see what makes the Haarkos tick.

Kirk speaks with the rescued kid pilot, Xill Kofza, and gives him a tour of the ship, ending in sickbay and the body of his leader, Cheyenn, who didn't survive the battle. Kirk helps Xill realize his responsibilities as their new leader, that they "need you to save them from themselves."

Captain's Log, Stardate 5268.8.
Thanks in large part to the efforts of Representative Melkor and Xill Kofza, the Lowarians and the Haarkos have agreed on terms of reparation. The Haarkos, closely supervised by Lowarian officials, will act as Lowaria's security and rescue force, while Loweria administers and maintains the mechs. In addition, each of the Haarkos will be assigned to live with a Lowerian family and attend Lowarian schools in order to integrate the pilots into the society they're now protecting. Though some of the pilots may see this as a punishment, I believe they couldn't receive a better gift.

Kirk and Carol Marcus in:

Kirk's days at Starfleet Academy in:

Retired super-soldiers were also seen in: 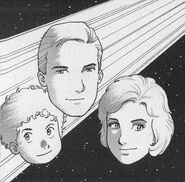 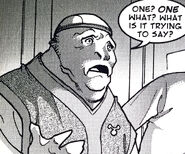 Firing on the Haarkos mechanoids.

Haarkos sword crashed through the hull.