2385.7 - 2385.8
"Our Dearest Blood" is a Star Trek: The Original Series comic published by Marvel-Paramount Comics in 1997, it is the third issue in the Star Trek: Early Voyages series, set during Christopher Pike's captaincy of the USS Enterprise. The story dramatizes the events on Rigel VII referenced in the episode "The Cage", including the real battle with the Kaylar later seen as a Talosian illusion, and the death of Yeoman Dermot Cusack.

On Rigel VII, Captain Pike, Doctor Boyce and Yeoman Cusack enjoy the Rigellian Festival of Light whilst awaiting the arrival of the Rigellian minister Etashnan. After a discussion about the forthcoming ratification ceremony for Rigel VII’s admission into the United Federation of Planets and the necessary changes in Rigellian society for the planet’s joining Captain Pike departs with the minister's aide Talza to visit the Zemtar fortress, the location for the ceremony.

On the Enterprise, upon receiving the all clear from Yeoman Cusack many of the crew, including Nano, Sita Mohindas and Spock make their way to the transporter rooms to enjoy some shore leave on Rigel.

Approaching the Zemtar fortress Pike and Talza discuss Rigel, its history and culture and what joining the Federation might mean to the planet. On the cliffs above a Kaylar, a member of Rigel’s soon to be disbanded warrior elite, stalks the pair…

In a Rigellian bar Dermot Cusack keep spirits high leading a master class in the art of making the perfect Sundowner, dubbing it a Kaylar Kalamity.

At the Zemtar fortress Pike attempts to contact the Enterprise, but cannot get through and soon finds himself confronted by a rather agitated Kaylar.

In the Enterprise’s observation lounge a contemplative Number One is joined by Moves-With-Burning-Grace to engage in a spot of stargazing when her communicator beeps; Lieutenant Tyler informs her contact has been lost with all surface personnel.

...Below Cusack and Mohindas also note the communications blackout. As another Enterprise crewman asks a Kaylar if he might know what’s going on the human is struck down by the warrior’s blade. Spock blocks one swing of a Kaylar’s club only to find himself thrown across the room. Nano responds using his pyrotechnic abilities to repel the Rigellians and the Enterprise crew make a run for their lives.

In the Zemtar fortress Pike keeps his own attacking Kaylar busy affording Talza the opportunity to escape.

As the Kaylar rampage through the city the Enterprise survivors stay out of sight. Nano manages to recalibrate his communicator to track the jamming signal and Cusack leaves to locate the transmitter and shut it down. He finds in the midst of the Rigellian Parliamentary Assembly building.

In the Zemtar fortress Pike manages to evade the Kaylar and as the warrior jumps down to attack uses a pike to spear him.

Meanwhile, Pike, pinned down by his fallen attacker and a new trio of Rigellian warriors, is rescued by Tyler and a landing party from the Enterprise. Upon returning to his ship the picture soon became clear. Rigellian extremists resentful of the Federation forcing changes in Rigellian society organized the coup. The situation is brought under control, but the event cost Rigel its Federation membership and the lives of three of the Enterprise’s crew… including Dermot Cusack.

This comic takes place shortly before "The Cage", placing it in 2254.

c. 13th century
The last known time off-worlders witnessed the Rigellian Festival of Light and lived. (Historical reference by Captain Pike, noting the date to be a thousand years prior to the events of the story.)
Years before 2254
The Federation makes first contact with Rigel VII, stimulating years of reform to throw off protectionist and barbaric traditions and ready themselves for a place in the galactic community as part of the Federation.
Stardates 2385.7 - 2385.8 (c. 2254)
The USS Enterprise arrives at Rigel VII to witness the planet's admission into the United Federation of Planets. Before the ceremony however, a Kaylar uprising endangers members of the crew on the planet. (Events of the story. No calendar date given, but events take place immediately before the episode "The Cage", in 2254.)

"Add a finger of Salurian rum, before the Hongua - preferably Arcturan - then a measure of Lathian spirit, a jiggle of bitter, and Bob's your uncle! The perfect Sundowner. I call it a Kaylar Kalamity."
"Intriguing, yet I fail to see what having a relative named Robert adds to the beverage." 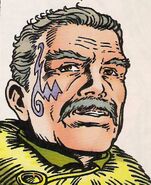 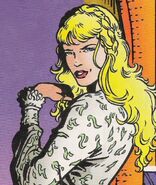 Number One in the Enterprise's observation lounge. 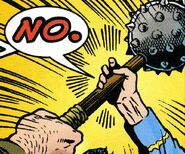