The Original Series (IDW ongoing) No. 29

Parallel Lives, Part 1 is the twenty-ninth issue of IDW Publishing's 2011 ongoing series of Star Trek comics. The issue is the first part of a two-part story arc by writer Mike Johnson, releasing in January 2014. Issue art was by Yasmin Liang, with Roberto Orci credited as creative consultant.

PREVIOUSLY IN STAR TREK...
After the events of STAR TREK INTO DARKNESS, the USS Enterprise has embarked on a five year journey of exploration into uncharted space, boldly going where no one... man or woman... has gone before...

Captain's log, stardate 2261.274
The Enterprise is completing its general survey of the previously unexplored world of Kassen Five. It's a class M pre-industrial planet with two dominant species. One significantly more dominant than the other.

On the surface of Kassen Five, Spock reminds the captain that it is past time to return to the USS Enterprise. Kirk overrules the first officer, eager to see if the sabotage on the prisoner convoy has worked. Besides, freeing one group of prisoners is hardly violating the Prime Directive. Yeoman Rand takes the moment to point out that the prototype image inducers the away team is utilizing are failing. Fortunately the locks on the prisoner convoy have failed and the blue skinned Kassens are free. To avoid the stone age creatures, the away team ducks behind a rock formation and orders a beam up. A little girl runs ahead of the group allowing her a glimpse of the transporters, waving to the form of Captain Jane Tiberia Kirk.

In the transporter bay, Kirk waves off Spock's concern about the girl witnessing their departure before praising Marjorie Scott's image inducers. On the way to bridge, Spock informs Kirk that she will not be making a report to Starfleet Command because, as Kirk says, there is no definitive proof that the girl saw the Enterprise team. Kirk however believes it to be lingering guilt from Nibiru. On the bridge, Kirk orders Sulu and Chekov to plot a new course into the unknown. Lieutenant Nnamdi Uhuro then receives a transmission from Admiral Thomas. The Enterprise is to proceed to the Campor system to investigate an unusual anomaly similar to the one detected by the USS Kelvin. In the privacy of her ready room, Kirk wonders what her mother would do in her daughter's place as a young "headstrong" female captain before the answer strikes her. She'd give the brass hell.

In the hallways, Uhuro reveals that on the next away mission, he wishes to join Spock. Spock is perplexed. Even a female Vulcan is stronger than a male human thus Spock is more likely to protect Uhuro then the other way round. Uhuro jokes that it must be a human thing for a gallant knight to want to protect his princess. Spock can only ask which of them is the princess in the analogy.

In sickbay, Doctor Lea McCoy gives Kirk a routine check-up to keep tabs on any effects the transfer of Augment blood may have on the captain. As McCoy theorizes the possible effects on both Kirk and any children she may have, she notices the bed sheets have inexplicably changed colour. Leaving McCoy to solve the minor mystery, Kirk heads off to a meeting of the senior staff regarding the Campor anomaly.

At the meeting Carl Marcus explains that the anomaly is a quantum storm a sort of cosmic knot between all the various realities in the multiverse. The Enterprise's proximity to the phenomenon is already causing aspects of other worlds to affect the ship such as programs being routed through different systems, the warp core giving off unusual readings or bedsheets changing colour.

All of a sudden the anomaly flares and draws the Enterprise into it. Without impulse or warp, Kirk decides to ride the rapids. The ship shudders violently as it approaches the eye of the storm before it emerges in normal space. As damage reports come in, Uhuro picks up another Constitution-class ship. Kirk hails their presumed sister ship but receives no immediate response. As she tries again, a male voice cuts her off. Did she just say her name was Jane Kirk? 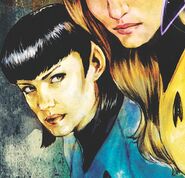 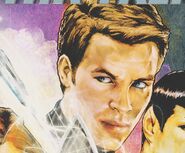 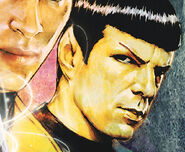 Retrieved from "https://memory-beta.fandom.com/wiki/Parallel_Lives,_Part_1?oldid=663442"
Community content is available under CC-BY-SA unless otherwise noted.