Lieutenant Worf returns victorious from a bat'leth competition and walks straight into his surprise birthday party. He begins to feel dizzy and disoriented, and is confused when his cake seems to change from chocolate to yellow and an absent Picard seems to appear out of nowhere. Worf is later summoned to engineering, where Data and Geordi show him how the Argus Array has been reprogrammed to spy on the Federation. Worf spots a Cardassian ship in the array's imaging logs and prepares to scan the area, but suddenly feels dizzy again, and recovers to see Data and Geordi working on the opposite side of the room. Spooked, he goes to sickbay to visit Beverly, and she states he is probably reacting to the concussion that cost him the bat'leth tournament. Shocked, Worf tells her he received no concussion and hurries to his quarters to retrieve his trophy to prove he won the contest. When he gets there, he finds a trophy that reads, "Ninth Place."

Beverly tries to ease Worf's worries by assuring him that his memory will return if he slowly settles back into his routine. He gets back to work, and is on the bridge when he is alerted to an approaching Cardassian ship. Picard speaks with the captain, Gul Nador, and explains that the Enterprise is in the area to repair the array. Worf tells Picard that Nador's ship is the same one they saw in the array's imaging logs, but Picard and the crew are confused — they never suspected the Cardassians of tampering with it. Frustrated, Worf fills Troi in on the bizarre turn of events when Geordi arrives and says that the array's problem was a simple malfunction. Worf starts to protest, but feels dizzy again and notices a painting on his wall has moved and changed appearance. He experiences a wave of dizziness in which Troi's clothing changes, then another that leaves him on the bridge with the ship at red alert and a Cardassian warship on the viewscreen.

Picard orders Worf to raise the shields, but he is too confused to do so before the warship fires. Riker takes over and retaliates, and while the Enterprise escapes, the Cardassians destroy the array. A disappointed Picard confronts Worf about his failure, and when Worf mentions memory loss, no one knows what he is talking about. Afraid he is losing his mind, he returns to his quarters, and is surprised when Troi arrives and tells him that she is his wife! Telling her he has no recollection of their marriage, he explains what he has been going through and is gratified that at least Troi seems willing to try to help him. Later, in engineering, Worf explains his experiences to Data, who points out that Geordi was present every time things went awry. They eagerly hurry to talk to Geordi, and are shocked to learn he is dead.

Still looking for clues, Data hooks Geordi's VISOR up to the diagnostic array, and Worf has another dizzy spell. He wakes up to find himself in a commander's uniform, and Data tells Worf that he has detected a quantum flux in his RNA. They report to Riker, who is now Captain, to explain this problem. Data says Worf's RNA indicates that he does not belong in their universe. Data and Lt. Wesley Crusher, who is now a part of the crew, discover that a quantum fissure in the space-time continuum is causing this. Hoping to find where Worf belongs, the crew scans the fissure with a subspace differential pulse. While they search, the Enterprise is attacked by the Bajoran ship B'tanay, and the fissure begins to destabilize. Realities begin to merge into one another, and hundreds of Enterprises appear.

Data realizes the only way to stop this phenomenon is to find Worf's Enterprise and send him back through the fissure to seal it. They manage to locate the right ship, and Worf boards his original shuttlecraft, re-modulated to seal the fissure. Worf soon arrives aboard his Enterprise, happy to finally be home, where he had won the tournament. 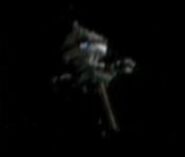 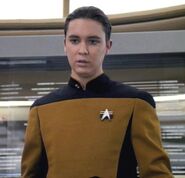 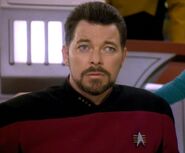 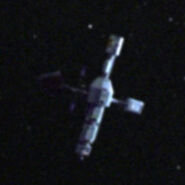