Star Trek: The Original Series No. 1

5440
Passage to Moauv was the first of 11 TOS stories produced by Peter Pan Records. It was initially released in 1975 as an audio production along with two other stories. It was subsequently packaged by itself accompanied by a 20-page comic book. This was the first of seven stories set during Captain James T. Kirk’s first five-year mission aboard the USS Enterprise and the first of six with an associated comic book.

In this story set in 2268, the USS Enterprise ferried a telepathic pet home.

Teaser ad promoting the initial LP release
The crew of the Enterprise in a trio of exciting adventures on a long-playing 33 1/3 RPM disc! You’ll be on the edge of your seat for the “Passage to Moauv,” weep for “The Crier in Emptiness,” and drink in “In Vino Veritas”! High-quality recordings, with no “warp factor”!

Captain's log, stardate 5440: The Enterprise has been ordered to transport the pet waul of the Moauvian ambassador from Centaurus Base to his home world of Moauv. We are proceeding on course... as rapidly as possible. 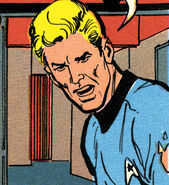 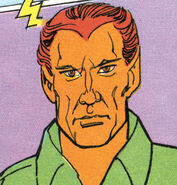 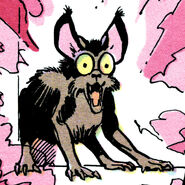 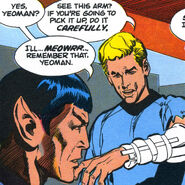 Prentiss with a splint