For other uses, see Past Imperfect.

7683.1
The past comes back to haunt Dr. McCoy! — "Past Imperfect" was the third of five stories in the TOS Untold Voyages miniseries published by Marvel Comics in 1998. The story was set in the third year of Captain Kirk's second five-year mission aboard the refit USS Enterprise. In this story, Joanna McCoy is reunited with her father Leonard McCoy.

Dr. Leonard McCoy and the USS Enterprise went to Starbase 11 for some much needed recreation while MCoy was to be reunited with his daughter, Joanna. However, after a misunderstanding, the two fought and went their separate ways. Realizing his error, McCoy went to apologize but Joanna's room had been ransacked and she was missing. Returning to the Enterprise, McCoy and the crew followed an unauthorized shuttle back to a world that the Enterprise hadn't visited in 8 years: Miri's world.

The USS Enterprise puts in at Starbase 11 for shore leave. McCoy beams down to see his daughter Joanna, whom he last saw prior to the V’Ger incident. Unexpectedly, instead of waiting alone, he sees her chatting with James T. Kirk. The three go to dinner, then Kirk takes her to the Enterprise for a tour of the ship. But the elder McCoy is nervous about her being around Kirk, and confronts her when she returns late to her hotel. She recoils at his fatherly protectiveness and storms out. Leonard also asks Kirk to stay away from her.

Joanna had been engaged to a man called Paul at medical school, but it didn't work out, and she dropped out. Leonard and Jocelyn McCoy divorced when Joanna was five years old, and the two women then went to Alpha Centauri.

Jahn, the prominent Only of Miri's homeworld, stole a shuttle from the Federation teams on Miri's homeworld. At gunpoint he’d forced one of the Federation workers to fly him to Starbase 11, where he’d intended to kill McCoy as revenge for the death of Miri. But after having spied McCoy and Kirk with Joanna, Jahn changes his plans and abducts her, taking them both to his homeworld. Jahn reveals that Leonard’s cure in 2266 for the Onlies wasn’t as effective as he thought. Now, the Onlies were sick again, and dying.

Sleuthing by Spock reveals an unauthorized arrival and departure by a shuttle assigned to Miri's homeworld. Having deduced that Jahn might have taken Joanna, USS Enterprise warps ahead of the shuttle. Kirk, Spock, McCoy and two security officers confronts Jahn when the shuttle lands, but Jahn holds Joanna at gunpoint. When Jahn threatens to kill her, Leonard can tell that Jahn was starting to press the trigger and dives into the Only, punching him, as the phaser fires harmlessly into the air. Jahn passes out, weak from an illness. Leonard and Joanna hug.

Later, McCoy reviews all the data left by the Federation teams who had been killed in frustration by the Onlies. McCoy considered that his original vaccine might have mutated, and he modified the serum to at least stabilize the Onlies. Whether it would work would not be known, as the Onlies want all the adults to leave the planet. Joanna had become sympathetic to Jahn’s situation, and he says it will be all right if Joanna returns.

Joanna says she will go back to medical school. The two McCoys reconciled, and Kirk visits Miri’s grave.

The Enterprise is orbiting Starbase Eleven, where the crew will be taking a long-awaited, much-deserved and much-needed shore leave...
... And where I will be reunited with my daughter, Joanna, whom I haven't seen since before I returned to Starfleet over three years ago, during the V'Ger crisis.
I'm very pleased that she was able to get away from Earth and come here for a few days, and I'm looking forward to catching up on lost time with her.

Medical log, stardate 7685.3.
Joanna has filled us in on what Jahn told her about this mysterious new disease that has afflicted the Onlies. To avoid any possibility of exposing the rest of the Enterprise crew, I've set up a temporary, makeshift medical ward in the Onlies' school building clubhouse... where I have conducted a thorough examination of Jahn and am now studying the disease.

Captain's log, stardate 7686.2.
Despite his personal turmoil, Doctor McCoy has been working around the clock and has come up with an experimental treatment — one that will hopefully, at the very least, stabilize the Onlies' condition. It is already being administered to the children.

Medical log, stardate 7687.0.
We're getting ready to return to Starbase Eleven, where we will bring the bodies of the Federation personnel who were stationed here. At some point the Onlies will have to answer for these deaths, but not right now. The Federation will wait until after the Onlies recover — assuming they will. I think about the families of those dead Starfleet personnel… their grief is on my conscience, too. I'm thankful than ever that Joanna is safe. 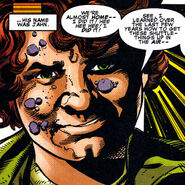 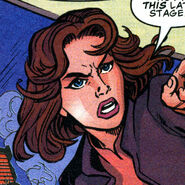 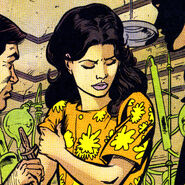 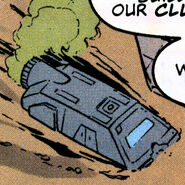