For other uses, see Past Prologue.

A Bajoran terrorist seeks asylum on Deep Space 9, forcing Kira to decide who is she is loyal to - her former freedom fighter associates or Sisko and the Federation.

We find Dr. Julian Bashir eating lunch by himself when the station's only Cardassian approaches and asks to sit with him. The Cardassian introduces himself as Garak and seems to know who Bashir is, although Bashir knows next to nothing about Garak. As Bashir points out, some say Garak stayed on the station as the eyes and ears of his fellow Cardassians. Garak seems surprised and asks if Bashir is intimating that he is a spy, to which of course Bashir says he wouldn't know. Garak says that he appreciates an open mind and notes that he is a tailor. As he leaves, Garak mentions that he is glad to have made such an "interesting" new friend; Bashir has been visibly nervous throughout their exchange. Heading to Ops as soon as Garak is gone, Bashir reports to an uninterested Sisko that he has made contact with the spy and reassures Sisko that the Federation's medical secrets are safe with him.

Bashir's new friend is soon forgotten when a Cardassian warship is seen chasing an unarmed Bajoran vessel. The Bajoran ship is about to be destroyed, so its pilot is beamed aboard the station. He is Tahna Los, an old friend of Kira's, and he requests political asylum from the Federation. However, as the Cardassian captain points out, Tahna is also a known member of the Kohn-Ma, a terrorist organization that is still fighting Cardassia. Kira reluctantly confirms this but insists Tahna is a good man. Tahna admits to being a Kohn-Ma member but says that he no longer wishes to be.

Meanwhile a pair of Klingon women, Lursa and B'Etor of the House of Duras, arrives on the station and Sisko tells Odo to keep an eye on them. When Bashir happens upon Garak in Quark's bar, Garak talks about fashion and mentions that Lursa and B'Etor's outfits are worth studying closely. Tahna enters the bar and the Duras sisters follow him out with Odo not far behind. Tahna meets with the Klingons in an empty cargo bay and tells them he does not have "it" yet. "It", Sisko suspects, will be brought to the station soon by two Kohn-Ma who supposedly want to start new lives.

Kira is in a moral dilemma because Tahna has solicited her to join the Kohn-Ma and help him steal a runabout. She confides in Odo that it was easier to fight when she knew who her enemies were. While she does not plan to help Tahna, she is hesitant to turn him in. However, she knows that she will feel guilty if Tahna kills innocent people when she could have stopped him.

The Duras sisters go to Garak's shop and inform him that they can deliver Tahna Los to the Cardassian government for a price. While he insists that he is not a representative of Cardassia, Garak claims he can contact one, after which he subtly hints that Bashir should buy a new suit at exactly 20:55. Once Bashir arrives, Garak hands him a suit, tells him to be quiet and pushes him behind a curtain. The Duras sisters enter and tell Garak that they will conclude their business with Tahna Los in four hours and that their rendezvous will be on the dark side of Bajor 8's lower moon. Once they are gone, Garak tells Bashir the compound the Duras sisters are delivering to Tahna will give him the ability to construct a bomb.

Unfortunately, there is as yet no tangible evidence on which to arrest Tahna, so the crew decides to give him the runabout and arrest him once his transaction with the Klingons is complete. Kira insists on going with him, however, because she believes that if does not then Tahna will suspect a trap. Sisko and O'Brien take another runabout to Bajor 8 ahead of Kira and Tahna in order to catch Tahna in the act. Kira feigns surprise when Tahna's involvement with the Klingons is revealed, and once the transaction is concluded Sisko and O'Brien's runabout attempts to intercept Tahna's.

Tahna is confused by the presence of the other runabout but realizes he has been betrayed when the same Cardassian warship from before comes after them. He points a phaser at Kira and orders her to take the runabout to the station; when she refuses he threatens to explode the bomb. Before they arrive Tahna tells Kira to adjust course and head for the wormhole instead. His plan is to destroy not Deep Space Nine but the wormhole; with no wormhole to fight over, he believes the Cardassians and Federation will both leave Bajor alone.

She adjusts course sharply enough to knock Tahna off balance and once through the wormhole launches the bomb, which harmlessly explodes in open space. By the time the runabout returns to the Alpha Quadrant, Tahna again has control and his phaser is aimed at Kira's head. He orders Sisko to do as he says, at which point Sisko offers Tahna an ultimatum: surrender to him or wait for the Cardassians, who are two minutes away. At that point Tahna hands the phaser to Kira. Back on the station, Kira tells Tahna she had to do what she did and that one day hopefully he will understand. 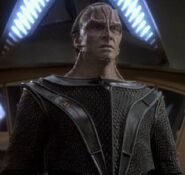