Rise of the Federation No. 5

December 9, 2165—March 18, 2166
Patterns of Interference is the fifth novel in the Rise of the Federation series by Christopher L. Bennett, and was released in August of 2017.

The saga of the Star Trek: Enterprise TV series continues with this thrilling original novel!

The time has come to act. Following the destructive consequences of the Ware crisis, Admiral Jonathan Archer and Section 31 agent Trip Tucker both attempt to change their institutions to prevent further such tragedies. Archer pushes for a Starfleet directive of non-interference, but he faces opposition from allies within the fleet and unwelcome support from adversaries who wish to drive the Federation into complete isolationism. Meanwhile, Tucker plays a dangerous game against the corrupt leaders of Section 31, hoping to bring down their conspiracy once and for all. But is he willing to jeopardize Archer's efforts—and perhaps the fate of an entire world—in order to win?

Archer's advocating of a non-interference policy is disrupted by a broadcast from Tony Ruiz showing that Maltuvis' atrocities have become more extreme, including the systematic total destruction of an opposing city. Archer is forced to agree with Shran that interference is needed and sh'Mirrin decides to send in the Essex crew as military advisors. Since Caroline Paris, who has just started a relationship with Reed, is still on Earth, Archer promotes her to captain of the under-construction USS Vesta.

Tucker tries to convince Harris, who he and his friends are convinced founded Section 31, to sabotage the mission on Sauria in order to force through the non-intervention directive. However, Harris reveals that the Orion Sisters are already sabotaging it. Tucker decides to try and frame Section 31 for involvement and asks Devna to assist him. Maras tells her to go along with it, and make sure the blame falls on D'Nesh.

Meanwhile, the Endeavour is requested by the crew of a cargo ship, the Verne, to mediate after they find a group of independently mobile trees which show signs of intelligence could be harvested for medical supplies...but may also be sentient. When their investigation causes the cargo ship crew to become impatient, one of them tries to force the issue by firing on the trees only to start a forest fire. The trees' actions in extinguishing it and caring for their dead create enough doubt to halt the harvesting. During the mission, Sato experiences an attraction to scientist Farid Najafi but emerges with her feelings for Takashi Kimura intact.

Tucker and Devna travel to Sauria and finds the Orions are using Garos, who is acting as an arms dealer, to sabotage a planned raid on a ship-building factory. Tucker tries to convince Garos to help them but he instead betrays him and Ruiz to Maltuvis. They escape and learn the factory has an anti-matter reactor: Destroying it will cause a disaster which the Federation will be blamed for. Tucker decides to kill Garos to prevent the raid and Ruiz is ultimately killed helping him get back to camp. However, he finds that Garos and Devna have already revealed the existence of the reactor to the Essex crew and called off the raid. The fact that Maltuvis has accepted alien help and endangered the population is exposed to the world. Maltuvis responds by blaming Harrad-Sar and publicly executing him...then strikes a new deal with V'Las.

After hearing full details of the destruction of the Partnership from his daughter and Kirk, Marcus Williams admits to Archer that he has been spying for Section 31. He makes a statement that opens an investigation into the organization (without exposing it): Many agents are arrested but Harris and his inner circle disappear. Williams resigns and Archer makes Reed his new aide, with Paris replacing him as captain of the USS Pioneer. Harris abducts Tucker and Devna and tells them there is a higher level to Section 31 that will ultimately re-emerge, but for now all of them are liabilities. He blows up his ship, killing himself and all the Section 31 inner circle, but Tucker beams himself and Devna to a ship provided by Akharin, content to let everyone think they are dead for now.

The non-interference directive remains unresolved and Shran, on learning Porthos is dying, elects to postpone the final debate and join Archer in looking after him in his last hours. 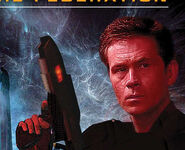 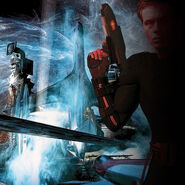 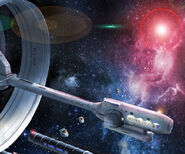