In 2370, several Perikian-class vessels were acquired by the Alliance for Global Unity. Two of these vessels were used to pursue a Bajoran raider that was being piloted by Major Kira Nerys and Lieutenant Jadzia Dax, and prevent them from reaching the Bajoran Provisional Government to reveal the truth behind the Alliance's coup d'etat. (CCG set: Deep Space Nine, CCG set: Second Edition; DS9 episode: "The Siege")

In 2375, several Perikian-class vessels participated in the blockade surrounding Derna, with the aim of preventing the Romulans from arming the moon with plasma torpedoes. (DS9 episode: "Shadows and Symbols")

The interceptors were designed to operate in a planet's atmosphere as well as being operable in space, meaning that they were the primary vessels which were used to protect Bajor from unwelcome vessels. Because of their benefits, the Maquis also utilized Perikian-class vessels to protect their colonial interests. DS9 episode: "Sanctuary"; TNG episode: "Preemptive Strike")

By the early 25th century, the class was called Denorios-class and had been retrofitted with warp drives to allow patrols on both sides of the Bajoran wormhole, known to the Bajorans as Celestial Temple. Because they were gradually phased out of service, the Bajoran Militia made the vessel available to commanding officers of Federation Starfleet, the Klingon Defense Force and the Romulan Republic. Upgraded with quantum slipstream drive and the latest Alpha Quadrant Alliance and Bajoran technology, the interceptor-type was rated a tier 6 escort. Allied officers with a rank comparable to rear admiral, lower half or higher were eligible to command a Bajoran interceptor. An interceptor was equipped with mark X weaponry, the Voice of the Prophets experimental weapon, and a special console for the D.O.M.I.N.O. system. (STO - Emergence mission: "Omega Molecule Stabilization")

In the 25th century, the design of the Denorios-class interceptor allowed its commanding officer to choose from different designs of livery, which could be modified further at starbases. These were the Bajoran Type 1 and Type 2 options. (STO - The Klingon War missions: "Welcome to Earth Spacedock", "Omega Molecule Stabilization") 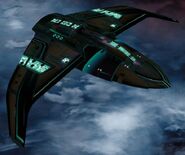