2270
Phaser Fight was a TOS interactive young adult novel, the second of two published in the 1980s by Archway, an imprint of Pocket Books. The story was written by Barbara Siegel & Scott Siegel, with the reader making choices to affect the outcome of the story.

You're the star of your own Star Trek adventure!

Welcome aboard, ensign! You've been assigned to duty on the starship Enterprise. Your mission: Investigate a mysterious meteor belt with Captain Kirk... or help Bones combat a deadly disease... or fight an alien race with Mr. Spock. You choose — you can beam over to a phantom ship overrun with fierce mirror-creatures... or match wits with a giant alien who wants to crush the Enterprise like a bug. But choose carefully, or the Enterprise and you could be lost forever!

Readers assumed the role of a Starfleet ensign newly arrived aboard the USS Enterprise. Choosing to go with Kirk, Spock or McCoy led to a different story.

A dangerous meteor storm appeared. Hikaru Sulu was knocked out when a meteor suddenly struck the ship through the shields. Spock reported that the meteors were composed of an unknown element that shields could not block. If the starship evaded the storm, Pavel Chekov detected an unrecorded planet two parsecs away. The ensign chose whether to travel to the planet through Klingon space or near a black hole.

Entering Klingon territory exposed three D7-class battlecruisers lying in wait. Luring the cruisers to the meteor storm crippled their ships, forcing them to contact their base on the planet and reveal that the meteors were built as a secret weapon against Starfleet. While one choice led to destruction of the base, two choices led to the loss of the Enterprise.

Traveling near the black hole put the ship at extreme risk, with one option bringing the Enterprise to a safe orbit around the planet with the Klingon base. The planet's owner, Professor Jinks, invited them down but provided questionable coordinates. The real Jinks was found confined in a cave by a group of Klingons — the other Jinks was an imposter responsible for building the meteors.

Ship's personnel contracted hyper-aging, and McCoy estimated they had only two hours to live. He quickly synthesized an antidote. If the ensign took it, events led to an encounter with an ancient entity that reached out with a massive, green, clawed hand capable of crushing the Enterprise, but the antidote enabled the ensign to communicate telepathically with the entity. If the ensign didn't take the antigen, McCoy took it himself, but he miscalculated the dosage and mutated into an ogre-like creature. Reader choices determined whether the crew died of old age, de-aged into nothingness, mutated, or were cured. 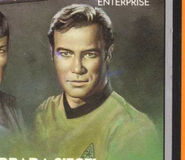 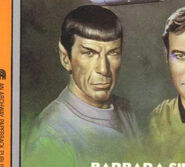