You've seen the trailer… now, witness the events leading to CBS All Access's Picard. Before he retired to his vineyard, Jean-Luc Picard was the most decorated admiral in Starfleet. Then one mission changed his life forever. The Countdown starts here!

2386. Earth. At the vineyard of Château Picard, Laris takes a moment to contemplate the strange Earth flora much to the ire of Zhaban who believes that the duo's coming to Earth was a mistake. Laris scoffs at that. Where else could the two go? Besides, don't they owe it to the man who risked everything to save them?

In 2385, Geordi La Forge oversees the construction an evacuation fleet at the Utopia Planitia Fleet Yards before he is informed of a call from the USS Verity. After being told that the first wave of ships is ahead of schedule and could be in Romulan space within the month, La Forge takes the call, being greeted by Admiral Jean-Luc Picard. Once Picard is informed of Starfleet's progress in constructing the escape ships, both he and Geordi express their dissatisfaction, that even with the impending supernova, the Romulans still adhere to secrecy.

As the Verity warps off to a Romulan colony, Picard again mulls on the supernova and that even after four years of cooperation, the Romulans still keep the Federation at arm's length. Still, he takes stride in what progress has been made, owing to both the abandonment of old prejudices and his new crew, in particular, his new first officer: Lieutenant commander Raffi Musiker. As the woman enters the ready room, she informs "JL" that Starfleet Command has redirected them to Yuyat Beta, a planet thought to be uninhabited as the Romulans still value the secrecy of their society. As the ship course corrects, Picard wonders how many colonies the Romulans are willing to sacrifice to sate their paranoia.

As the Verity drops out of warp, Picard is pleasantly surprised that they're being hailed immediately and speaks with Major-Domus Athus who allows Picard and Muisiker, but no others, to beam down. When the two materialize they are quickly greeted by an armed platoon and led down several secret passageways and back doors before they are brought before Athus on a balcony overlooking the Arcadian colony. Governor Shiana then makes herself, and her interest in the human race, known. Though imperial protocol dictates that Federation interaction with the colonies are to be limited, Yuyat is somewhat more liberal in its policies and Shiana allows Picard full run of the premises, all to better ensure her colonists' evacuation.

As Athus leads the two humans around, he explains that Yuyat is a farming colony, with its exports dwarfing that of much larger worlds. As a result, its colonists will not easily give up their world. Picard is sympathetic to their plight, more so when he sees a Romulan vineyard. Picard's good mood however is soon shattered when he sees the simple Yuyatis tilling about the fields. Unlike the Federation, Romulan colonizers target inhabited worlds and trade their advanced technology in exchange for labour, forced labour as Musiker so aptly recognizes. Enraged, Picard asks how many Yuyatis there are, as his force can only evacuate 10,000 individuals. After being informed that four to five million Yuyatis exist, Picard demands to be taken back to the Governor.

In Shiana's chambers, both sides are at an impasse. The Romulan Senate is perfectly willing to leave every alien behind while Picard refuses to commit an act so contrary to the very spirt of the Federation. Seeing that no agreement can be reached, Shiana orders her troops to take Picard and Musiker prisoner, deciding that they will have to take the USS Verity some other way.

In a cell, Picard berates himself for his foolishness in trusting the Romulans, and how years of hard work is liable to be undone. Even as he sits, Picard can hear it. The unseen clock, ticking, counting down to a supernova. 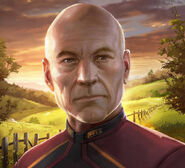 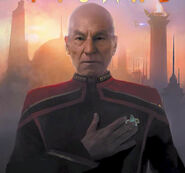 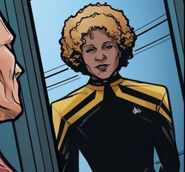 Laris.
Add a photo to this gallery

Retrieved from "https://memory-beta.fandom.com/wiki/Picard:_Countdown,_Issue_1?oldid=671083"
Community content is available under CC-BY-SA unless otherwise noted.