As the situation on the Romulan colony continues to unravel, Picard finds himself faced with a difficult choice that will affect millions. The official countdown to the Star Trek: Picard series on CBS All Access continues here!

On Yuyat Beta, Laris and Zhaban discuss the risk of helping Jean-Luc Picard and how they have no choice but to do so.

Speaking of the man, he is currently dining with Governor Shiana, demanding to know where Raffi Musiker is being held. The stalemate continues to hold, the Romulans will not evacuate the Yuyati and Picard will not leave them behind. As he's being escorted back to his cell, Picard condemns the blindness and ignorance of the Romulans before the wall explodes. As Picard is carried away, armed Yuyati arrive to rescue him. Though unable to speak their language, Picard guides them to where Musiker is being held, freeing her, before the two follow the Yuyati out of the city.

Arriving, the group is met Zhaban, whom Picard recognizes as a worker in the now burning vineyard, who welcomes them inside a cavern with upside-down waterfalls. Zhaban's colleague, Laris, makes herself known and reveals that the two are agents of the Tal Shiar.

In orbit, the USS Verity is hailed by Shiana who claims that a terrorist attack has killed both Picard and Musiker. In command, Lieutenant Newton allows the governor to beam aboard. On the surface, Shiana notes that although they've lost Picard as a hostage, they've gained the Verity as another.

In the cavern, the claim is met with skepticism. After all, the last thing a Tal Shiar agent would do is announce their loyalty. The two concede the point but nonetheless reveal that many Romulans see the Federation's offer of aid as a smokescreen for sabotage and were plotting to steal the Verity. As for why the two are helping them, it is because they have, in direct contravention of the Tal Shiar's rules, fallen in love. Equally unwilling to leave so many innocents behind, the two had to free Picard but, as the man notes, what they really need to do is get him back to the Verity.

On the ship, Newton welcomes Shiana and sets her up in the captain's ready room to contact the Imperial Romulan State. As the governor makes herself comfortable, she punches in an override code that gives her full command of the Verity and its systems. With a smirk, Shiana encourages Newton to stand down, lest he meet the same fate as Picard. 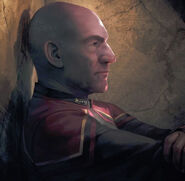