The Piersol's Traveller is one of the few notable lifeforms native to Marcos XII.

The Traveller is a blueish tree that was named after Piersol, the botanist that discovered it. Despite being a tree, it roams the planet freely, seeking sustenance from various bodies of fresh water, such as ponds and streams. Once settled in a body of water, the Traveller uses its foot-like roots to draw in water. They are neither intelligent nor hostile organisms, drawn from food source to food source by instinct. (ST reference: The Worlds of the Federation) 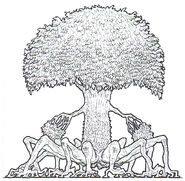