Planet of the Dead

Planet of the Dead

2266
"Planet of the Dead" was a seven-page Star Trek: The Original Series comic strip published in 1972. It was the eighth of 11 annual stories from the UK comic strips series and was printed in the United Kingdom along with "What Is This Thing Called Spock?" in TV21 Annual 1973. In this story, Kirk and Spock brought an expedition to a new planet.

Omnibus teaser
The Enterprise ferries a scientific team, led by Kirk's friend Richard Spellman, to colonize the planet Selkye. There, the crew finds the mummified remains of toad-like aliens, as well as cute little critters that McCoy dubs "beavos"…

Professors Richard Spellman and Jean Ravel lead a small expedition to the unexplored class M planet Selkye to determine its potential for colonization. A shuttlecraft from the USS Enterprise descends to the surface, bringing the team along with its supplies and equipment. They land within a city built by a lost civilization. Although they hear no animal life on the surface, exploring the ruins results in finding some affectionate, hand-sized furry animals and eight large husks of desiccated amphibians. When the shuttle leaves, Leonard McCoy keeps one of the furry animals as a pet, calling it a beavo, and also ships back one of the amphibian corpses for examination.

The Enterprise proceeds towards its next assignment. McCoy wakes up the next morning exhausted rather than refreshed. Uhura takes care of his pet while Kirk and Spock bring McCoy to sickbay, but as they are leaving, they hear noises from a storage compartment — the amphibian bursts free, seemingly come back to life. Kirk retrieves a phaser and shoots it, apparently killing it. Kirk turns the starship around and head back to Selkye.

Kirk, Spock and McCoy return to the city in a shuttle, landing near the scientists' base camp. There they find the entire expedition locked within their shelter, debilitated as if by an illness, hiding from a group of the amphibians. When Montgomery Scott reports that the creature on the ship had to be stunned again and that Uhura is now showing the same symptoms as McCoy, Kirk realizes what is happening. They lock all of the beavos overnight in a metal box, as does Scott with Uhura's beavo. By dawn, the amphibians become dormant and the humans feel more energetic. Kirk conjectures that the beavos absorb life energy for the creatures, and were probably responsible for wiping out all animal life on Selkye, including the ancient civilization. The expedition abandons the planet, grateful to be alive. 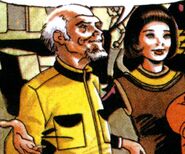 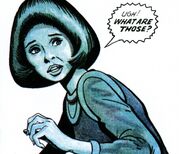 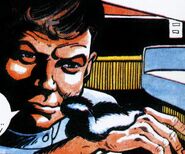 Leonard McCoy with a beavo. 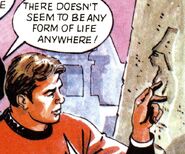