"Planetfall" was the third of four licensed short stories published by FASA in Stardate Magazine, this one in vol.1 #3/4. It was written by Michael A. DeLuca II, who also wrote FASA RPG module: The Barrier of Essai. In this story, a survey team aboard a shuttle from the USS Enterprise crashes on a jungle planet.

The USS Enterprise visits Tau Omega, a system with two class M worlds. Spock leads a team to the fourth planet, which showed indications of having intelligent life, while Leonard McCoy organizes the ship's senior scientists on a four-hour flight to the verdant third planet aboard the shuttlecraft Copernicus. At the last minute, an emergency surgery forces McCoy to back out, and Doctor James Brennan takes his place. During the flight, a massive solar flare disables the shuttle's circuitry, and pilot Lewis Baker manages a controlled crash landing on Tau Omega III.

Baker tries to repair their subspace communication, but all systems were fried. Having nothing else to do, the science officers explore the surrounding jungle, finding a flint arrowhead and huge footprints. While inspecting a sheered-off engine nacelle in the woods, Baker spots a nine-meter tall dinosaur approaching the shuttle and warns Brennan, who quickly retreats into the wreck. The lizard reaches a paw through the hatch to grab him, but Brennan's phaser burns it, and it’s quickly yanked back. The creature kicks the wreck, flipping it over and crumpling it. Hearing the encounter, the science team rushes back and kills it with phasers. They melt the shuttle's crumpled hatch to rescue Brennan, but it's too late.

The landing party digs a temporary grave, then notices that senior botanist Carl Perez has gone missing. While they search for him, five human-sized, winged reptiles land and strip the dinosaur's carcass with their claws, stacking its meat in organized piles. The harpy-like bipeds debate the shuttle's origins, noting that it looks different from other ships they've seen. Fistus climbs inside for a look.

The science team soon returns, panicking the harpies. Security officer Kevin Fitzroy aims a phaser at one menacing harpy, but Fistus sees what's happening through the shuttle's observation ports and tackles the harpy. Slowly, senior biologist Francis Greelee scans Fistus with a tricorder, then asks Baker to retrieve a universal translator from the wreckage. Baker can't get to it, however, and as the people converge on the harpies, Fitzroy makes a hostile move and a fight breaks out. The brawl is interrupted by the noise of a transporter beam, and the harpies quickly fly away as a rescue team materializes.

Two days later, shortly after the Enterprise rendezvoused with the USS Ranger, Baker and Bennit share lunch in the mess hall. Baker suggests that Bennit try not to obsess over the losses of Brennan and Perez.

That evening, Fistus sits alone atop the abandoned Copernicus wreckage, lamenting that he'd not been able to learn more about the strangers. Perez emerges from the jungle, glad to have finally found his way back to the shuttle. He is startled by the site of the harpy, but Fistus is grateful. 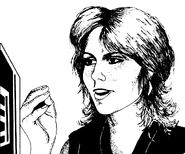 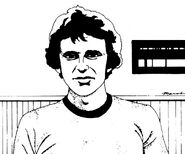 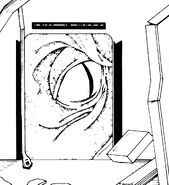 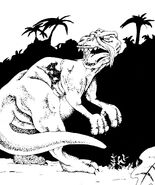 An omegasaurus.
Add a photo to this gallery

Retrieved from "https://memory-beta.fandom.com/wiki/Planetfall?oldid=763851"
Community content is available under CC-BY-SA unless otherwise noted.