The Taurus Reach. Once the conquered realm of a powerful alien species, this region remains largely shrouded in mystery even as it brims with potential for exploration and colonization. The Federation has sent in two of its finest starships on a quest to uncover the secrets it may yet hold...

The Tomol are a primitive civilization occupying a lone island on a remote world. Their culture is an enigma, centered on every member’s commitment to a painful, fiery self-sacrifice upon reaching maturity. But one of their clan has shunned this obligation, triggering a transformation into a new, powerful life form. Answering the distress call of the U.S.S. Sagittarius—which has crashed on the planet following a fierce battle with the Klingons—Captain Atish Khatami and the crew of the Starship Endeavour must now attempt a rescue mission…even as they are locked in battle with the evolving, increasingly malevolent Tomol who, if allowed to escape their home world, pose an imminent threat to the entire galaxy!

The crews of the USS Endeavour and the IKS Voh’tahk consider their options following Nimur’s decree that they withdraw from her territory, especially with the USS Sagittarius and scientist Tormog still trapped on the surface of Nereus II (known as Arethusa by the inhabitants). Captain Terrell advises Captain Atish Khatami to obliterate the debris of the crashed IKS Homghor along with any of the dangerously Changed Tomol in the vicinity. The bird-of-prey is reduced to slag, the Changed Wardens are killed, but Nimur, though wounded, survives. Captain Kang is angered by the assault on his sister ship and attacks the Endeavour himself, though the Voh’tahk sustains more damage than the starship and withdraws to make repairs. Upon awakening, Nimur heals her injuries by thought alone and conscripts more Tomol, including her foster sister Kintaren, into the ranks of her Changed army. They become aware of the nearby Sagittarius and intend to find and use the ship to escape their world.

An Endeavour landing party beams to the surface to help the Sagittarius crew repair their ship. Science officer Lt Commander Stephen Klisiewicz compares his scans of the Tomol to his secret and illicit copy of the Operation Vanguard database, gifted by the late Ming Xiong, and finds that the Shedai’s genetic alterations to Tomol DNA are irrelevant to the Change. Dr. Anthony Leone leads another team to the Tomol village, where he meets Seta and deduces that she’s likely in danger from attack by the Changed, as she holds the key to combating them. He evacuates her to the Endeavour and conducts more medical tests on the Tomol genome. The Starfleet personnel still on the surface meet with Kerlo and Tormog.

Nimur’s party attacks the combined Starfleet/Tomol group. Those newly Changed can be brought down with enough firepower, though Nimur proves to be beyond such weapons. Sensing the danger, the Preserver obelisk sends out drones that combat the Changed, imprisoning them in a petrified shell that holds them in indefinite stasis. Most of the Changed are caught in this new weapon, though several security officers are as well, and Nimur escapes. When the Endeavour conducts a high-intensity scan of the obelisk, it is interpreted as aggressive and the starship comes under attack, forcing its withdrawal from orbit. The team stranded on the surface follows a Tomol legend and finds the Endless, other Changed who were imprisoned in stone more than 3,000 years earlier, though still alive in stasis.

Klisiewicz develops a half-proven, half-supposition theory: the Tomol began evolving toward the Change on their unknown homeworld eons ago. They were later discovered by the Shedai, who wanted to use them as weapons against their enemies and who tried to control the Tomol through genetic manipulation. Their efforts had disastrous side effects—upon reaching the Change, the Tomol lost all sense of reason and became super-powered berzerkers who turned their rage against their captors. Deciding to cut their losses, the Shedai isolated all of the Tomol on their homeworld and left them to obliterate each other. Before the genocide was complete, the Preservers relocated a few hundred children to the island of Suba on Arethusa and set up laws and rituals to prevent the Change from destroying their new society. They also left behind the obelisk and its arsenal for worst case scenarios.

Kang grudgingly agrees to cooperate with Khatami in rescuing their stranded personnel, including Tormog. The Sagittarius crew fortifies their position shortly before they are again attacked by Nimur and her people. They hold the Changed at bay until more drones arrive to petrify them all, Nimur included, though she is able to forcibly Change the Tomol working with Starfleet before she is incapacitated. The scoutship itself is almost entombed within the petrification field, saved only by its shields, and Kerlo, mad with his new power, escapes to build his own Changed army.

Dr. Leone develops a synthetic viral agent to purge the Shedai markers from the Tomol genome and to rewrite those missing segments; it won’t stop the Change, but it will prevent the accompanying insanity. He and Seta return to the planet, where she convinces her people to accept the “sky people’s” help. They inoculate the village and evacuate them to the Caves of the Shepherds, where they hope to be safe from Kerlo’s approaching forces. The Endeavour shuttle Masao and the Sagittarius, now somewhat repaired and airborne, provide air support for the evacuation. The shuttle is damaged and crashes, though with no casualties, and the scoutship is forced to withdraw when several of the Changed sprout wings and begin tearing into the hull before they are repelled. A few of the Changed make it into the caves, so the Starfleet personnel withdraw, hoping that their absence will spare the villagers from harm. Kerlo and Endeavour XO Katherine Stano face off within the caves, though Seta intervenes and challenges the Changed herself. He forces her to undergo the Change, but she injects him with Leone’s virus, and both rapidly mutating beings fight until the still-sane Seta flees for the safety of the obelisk.

The obelisk executes its endgame tactic, petrifying the entire island (save its own cave) and putting every living thing into stasis. Only the Tomol within the caves are spared, and the Starfleet team (including Tormog) narrowly escape to their starships. Kerlo’s reasoning returns moments before he is encased. The orbiting Endeavour and Voh’tahk are attacked, but Khatami destroys the weapons’ source.

Seta and the villagers find themselves refugees, their home and any stragglers entombed under a crust of stone. However, Seta uses her newfound abilities to transmit Leone’s treatment though the shell while simultaneously sublimating it. Life returns to the island of Suba and all of those surviving Changed regain their rationality. Nimur, Kerlo, and Tahna are reunited, and though they will be judged for their actions, they readily accept it and will not be harshly punished. Tomol society will continue to evolve and adapt to their new lives, whatever that will ultimately be, free of outside influence. Khatami and Kang part as respected warriors, the latter vowing that he will leave the Tomol alone; if his superiors want to conquer the Tomol, they’ll have a real fight on their hands, and there are plenty of easier targets still within the Taurus Reach. Leone and Klisiewicz receive commendations for their exceptional work, though the science officer must surrender his Vangaurd database. Khatami is unsure what to do with the classified information, aware of the danger it poses in the wrong hands, but acknowledging how crucial it was to the successful completion of their mission and to ensuring the Tomol’s freedom. 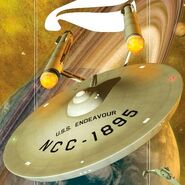