The Janus Gate No. 1

The crew of the USS Enterprise is exploring the seemingly peaceful and uninhabited world of M-3107 when a bizarre and unexplicable transporter accident causes both Captain Kirk and Dr. McCoy to vanish completely. Transporter records suggest that the two men were transported somewhere, but their ultimate destination remains a mystery.

But then the rescue team disappears as well!

After barely escaping from Psi 2000 the Enterprise is caught in a time warp following a cold-restart of the warp engines by Lt. Commander Scott. When Lt. Sulu reveals that the ship's chronometer is running backwards, Kirk orders a full stop and they find that they have traveled back in time 71 hours.

As Kirk orders the Enterprise to proceed to the rendezvous with the USS Antares, Spock stops him and reminds him that because the Enterprise has traveled back in time, there are now two Enterprises', one with no idea of the existence of the other. Not wanting to lay waiting in space for three days, Kirk decides to proceed to Tlaoli IV to collect the survey teams they left on the planet before the mission to Psi 2000.

On arrival in orbit, the Enterprise is contacted by Geological Technician Edward Fisher, who informs them that they have lost contact with one of the teams assigned to survey the cave regions of the planet. When Kirk demands to known why their assigned survey areas of changed, Fisher describes to Kirk the remains of the starships that they have found on the surface. Believing that the Enterprise could be at risk, Fisher changed the assignments.

The Janus Gate and other concurrent publications were the first to use the full title "Star Trek: The Original Series" in their cover banners. Previous TOS works simply referred to TOS as "Star Trek". 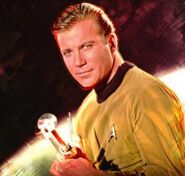