Star Trek vs. Transformers No. 1

5892.7
Prime's Directive, Part One is the first issue of IDW Publishing's crossover between The Animated Series and The Transformers.

At the edge of Klingon space, the Starship Enterprise finds there's more to the final frontier than meets the eye, when Kirk and his crew come face to face with the strangest life forms of all: Cybertronians! This unprecedented crossover brings together two of the greatest science fiction universes of all time – in the style of their classic animated series! A five-year mission meets a four-million-year war!

Stardate 5892.7. The USS Enterprise sails for Cygnus Seven, a dilithium mining colony dangerously close to the Klingon border. The miners have recently run afoul of an increasingly hostile Klingon presence, necessitating Starfleet's intervention. When Uhura attempts to raise the colony however, she finds all communications are being expertly jammed at the source. And disturbingly, though Spock's scanners still function, he cannot actually pick up any Klingon vessels nearby. Taking Sulu, Spock, and M'Ress with him, Kirk beams down to the colony...

...and into a warzone. The colony is being systematically destroyed by self-piloted 20th century aircraft armed with powerful energy weapons. Three of the planes then open fire on the Enterprise crew, forcing them to scramble for cover. The exchange of firepower blasts open a mine shaft from which a flat-nosed trailer truck emerges, also of 20th century design. Convinced that the vehicles are being remotely controlled by the Klingons, Kirk fires with his phaser's full power, striking the vehicle's right side. With a cry of pain, the truck transforms into a towering robot that soon collapses from the pain of the wound.

As the aircraft return, Kirk demands an identification. The aircrafts follow the truck's example and reveal themselves to not be Klingons but Decepticons. Unamused and disgusted by the organics before him, Megatron orders Soundwave to destroy them (though Airachnid would much rather keep Kirk as a pet). Soundwave's attack, however, while debilitating, breaks through his own interference allowing Kirk to call for a photon torpedo bombardment. Though singed, the Decepticons still function, with Megatron opting to fall back until more knowledge is gathered. Over Starscream's protests of retreat, Soundwave directs the group to a nearby moon from which a Decepticon signal is emanating.

With their foes gone, the Enterprise crew returns their attention to the first robot, Kirk curious about his seeming familiarity with humans. To aid in repairs, McCoy and Scotty are called down, the former as grouse as ever, the latter beside himself at the complexity of the machine's internals, the same complexity that convinces him they are dealing with a sentient mechanical lifeform.

On the moon, the Decepticons find the signal is Trypticon, locked in city mode but having been found by a group of stranded Klingons, the same ones who intended to attack the mine before the Decepticons got there first. Though Airachnid continues her disgust of organics, Megatron is able to smooth talk Kuri into an alliance, one based off their mutual hatred of humans.

Having detected energy within the downed robot emanating from within the mine, Sulu leads the away team deeper into the bowels of the planet, eventually coming to a large blast door emblazoned with the Autobot symbol. As Kirk and M'Ress debate how to enter, the door is blown open from the inside...

...revealing Jazz, Arcee, Windblade, Ratchet, and Bumblebee, unpleased to see humans and demanding to know where Optimus Prime is.

Captain's log, stardate 5892.7.
The Enterprise has been called to Cygnus Seven, a remote dilithium mine dangerously close to the Klingon border.
The miners have reported an increasingly hostile Klingon presence — culminating in the distress call that led us here. 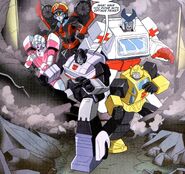 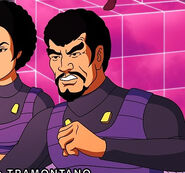 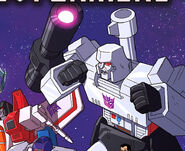 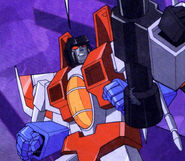