2269
Starfleet's highest law has been broken!

Starfleet's highest law has been broken. Its most honored captain is in disgrace, its most celebrated starship in pieces, and the crew of that ship scattered among the thousand worlds of the Federation...

Journey with Spock, McCoy, and the rest of the former crew of the starship Enterprise to Talin—the planet where their careers ended. A world once teeming with life that now lies ruined, its cities turned to ashes, its surface devastated by a radioactive firestorm—because of their actions. There, they must find how—and why—this tragedy occured... and discover what has become of their captain.

The Enterprise crew have been disgraced and forced out of Starfleet, blamed for the disaster which has all but destroyed Talin IV. The ship remains in orbit around the planet, badly damaged, while repair work is carried out.

The Enterprise was summoned to Talin to assist the First Contact Office: The planet was on the brink of nuclear war because observation of Federation craft was mistaken for surveillance by opposing power blocs. Peace negotiations began just as an attack was ordered but an accidental detonation triggered an automated nuclear salvo. Kirk chose to take the Enterprise into the atmosphere and flood it with radiation to disable the warheads. Not long after, however, an even more extreme launch took place and an attempt to repeat the trick saw the Enterprise fired upon and forced to warp out of the atmosphere, causing severe damage. The Talins were devastated by the nuclear exchange and Kirk and the bridge crew were charged with breaking the Prime Directive, with the contention that if they'd allowed the first exchange to proceed the second would never have taken place.

McCoy, Sulu, Chekov and Uhura hijack an Orion slave ship to return to Talin, while Kirk books passage aboard a cargo ship run by an ex-Starfleet officer. Scotty, left onboard to supervise repairs, comes to believe the Enterprise was crippled by a subspace pulse beyond Federation or Talin technology and is given permission to recall the Enterprise crewmembers still in Starfleet to help investigate. Spock, who has associated with a student group opposed to the Prime Directive, addresses the Federation Council and uses a legal loophole to argue that Talin IV is a de facto Federation member and should be granted aid, presenting two Talin astronauts who left on a mission jointly organised by both nation states prior to the holocaust as ambassadors.

The former senior staff are granted access to the FCO office by the Talins and Spock quickly concludes the Talins were looking out for alien visitors long before the Federation arrived and that the rise in tensions was the result of deliberate external interference. He, Kirk and McCoy explore a cavern on the moon which turns out to be home to non-intelligent insectoid aliens known as the Many, who have seeded the planet with algae that thrives on radiation. They give the trio co-ordinates that will lead them to something they call The One.

Under Scotty's nominal command, the Enterprise travels to the co-ordinates and discovers the One, a being from an older universe who feeds on the algae. Determining the creature is acting on instinct and had no malicious intent, Kirk takes no action against it, instead deciding to modify a lifeless gas giant in the Talin system as an alternative food source. The Prime Directive is ruled non-applicable and the Enterprise crew reinstated, allowing them to begin relief work on Talin.

This novel, published in 1990, predicted the discovery of fossilized lifeforms on the planet Mars. Five years later, scientists announced discovery of evidence of bacteria fossils in an asteroid believed to have originated on Mars.

Robert Orci, one of the screenwriters of the 2009 Star Trek film, lists this as one of his two favorite Star Trek novels. Scenes from this book were used as readings for casting-calls for the movie. He reported that there would be nods to some of the lore in this novel in the movie. (http://trekmovie.com/2008/09/19/orci-kurtzman-trek-very-true-to-canon-even-books/) 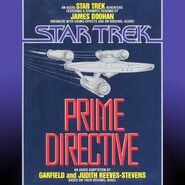 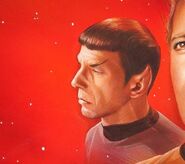 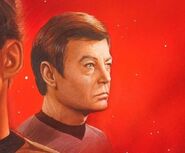 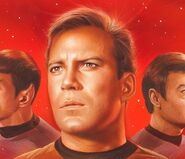 The Pocket Books Timeline (and Memory Beta) places this novel in 2269, between the end of The Original Series and the start of the animated series; however, the compilation Worlds in Collision specifies the date as 2271, at the end of the first five-year mission.