unknown
"Prison Break" was an 18-page Star Trek: The Original Series comic strip. It was the 23rd weekly story arc in the UK comic strips series, published in six installments in TV21 Weekly in 1971. This was the fifth of six stories drawn by Vicente Alcázar and Carlos Pino. In this story, four murderers escaped from a Federation penal colony.

Teaser, August 7, 1971
While the starship Enterprise lay in orbit above the prison planet of Certax, undergoing repairs, four convicts — Jarman, Mendoza, Kelly and Schirach — had smuggled themselves aboard...

The Enterprise's number six warp reactor suddenly blows apart. While putting out fires, crewman Corcoran is accidentally exposed to lethal levels of radiation. Captain James T. Kirk diverts the starship to the nearest Federation port with hospital and engineering repair facilities, which turn out to be Certax, a penal colony.

Four of the convicts learn about the situation in orbit above them. They kill a guard and four engineering technicians, then slip aboard the Enterprise as part of Certax's repair crew. They hold the bridge crew at gunpoint and lock Montgomery Scott and Nyota Uhura in a storeroom under guard. The colony governor warns the ringleader, Cal Jarman, that he will not hesitate to fire missiles at the Enterprise if he does not surrender.

Jarman retaliates by threatening to drop the irradiated warp reactor onto the colony, which will strike like a nuclear bomb. Kelly suggests that they bomb the colony anyway, and leaves with Mendoza to arrange it. Leonard McCoy finds the two convicts entering an airlock. He'd hoped to knock them out with an anesthesia gas gun, but they are wearing environmental suits. McCoy fills two syringes with a drug and follows them in an EVA suit into the shuttle bay, where the damaged reactor had been stored within a lead container. During his confrontation with the criminals, McCoy punctures their suits, and they fall into space along with the reactor.

The reactor strikes the port side of the secondary hull and breaks apart, scattering irradiated material and shaking the Enterprise. Jarman losess his balance, and Kirk and Spock subdue him. McCoy gasses the fourth convict, freeing Scott and Uhura, but lethal radiation outside the ship poses a serious danger to the crew. A repair shuttle arrives from Certax with one technician aboard. It is Corcoran, the dying crewman – he salvages the debris and then gives a salute, sacrificing his life to save the ship. 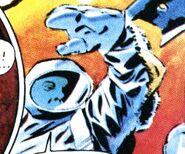 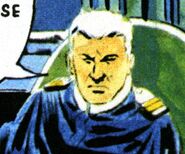 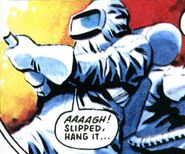 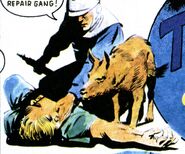 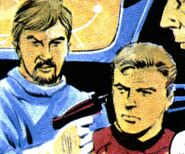 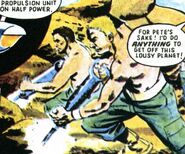 Mendoza and Kelly with jackhammers. 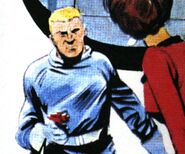 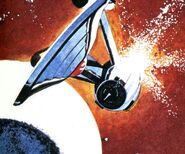