Qo'noS, also known as Kling, was the homeworld of the Klingon civilization and capital planet of the Klingon Empire, located in the Klinzhai system. (TOS movie, novelization & comic adaptation: Star Trek VI: The Undiscovered Country; TOS novel: Cast No Shadow)

In the TOS novel: The Final Reflection and the FASA RPG module: The Klingons (both by John M. Ford), the Klingon homeworld was given the name Klinzhai, which was used in some later works such as The IDIC Epidemic and Ishmael before being superseded by The Undiscovered Country. Klinzhai was restyled as the system name in Cast No Shadow.

The world orbited an orange bright sub-giant (Type K1 IV) star and possessed two moons: Corvix and Praxis, the latter of which became remnants that circled the planet after it exploded in 2293. The planet itself possessed a single landmass that comprised the entire habitable surface. The terrain consisted primarily of high, rocky mountains, jagged cliffs, and rivers of lava, which were the result of unstable tectonics. A greenhouse effect caused by the volcanic ash kept the planet's surface warm and trapped its oxygen-nitrogen atmosphere. The interaction of cold air over the ocean and extremely hot air over the continents gave rise to sizable storms; with no land on the planet's far side to halt their growth, hurricanes the size of Earth's North America formed over the sea and slammed into the land like a sledgehammer. Visitors to Qo'noS found it difficult to move around in the high gravity (1.23G) and thick atmosphere causing fatigue among those who visited the planet. (Decipher RPG module: Aliens)

Out of the other five planets in the system, Qo'noS was the only habitable Class M planet, though it required a certain level of technology in order to maintain the environment. (TOS video game: Starfleet Command)

This clashes with the information in the Decipher RPG module: Aliens book which states it is the third world within a ten planet system.

500,000 years ago, what would be considered the "earlier recognizable Klingons" appeared on Qo'noS. (Last Unicorn RPG module: All Our Yesterdays: The Time Travel Sourcebook)

In the year 2293, the most significant change yet to occurr to Qo'noS was the destruction of its moon Praxis due to over-mining. (TOS movie: Star Trek VI: The Undiscovered Country) The remains of the moon formed an asteroid belt around the planet which removed any detection systems the Klingons had in place. Furthermore, the asteroid field resulted in frequent meteor showers raining on the planet below with the larger pieces crashing into the Klingon homeworld fifty years after Praxis' explosion. This was a dangerous event for the Klingon homeworld and the species itself as it may have resulted in a slow death without assistance from the Federation. (TOS novel: Sarek)

In 2376, Qo'noS was listed as the host location of a current or past marathon. (New Worlds, New Civilizations short story: "The Footfalls of Tradition")

In 2410, Qo'noS orbit was invaded by a surprise Undine force intent on damaging the Klingon Empire. The invasion was stopped due to the efforts of a Federation fleet led by Rear Admiral Tuvok, commanding the USS Voyager. The actions of the Federation led to a ceasefire between the two superpowers, both realizing there were more prevalent threats. (STO mission: "Surface Tension")

The Klingon homeworld is the most heavily defended planet in known space, due to the Klingons' natural distrust and paranoia being at its peak when it comes to the defense of their homeworld. It's planetary defenses include a huge network of defense satellites, both manned and unmanned. Orbital stations which are similar to those near most Klingon colony worlds but significantly larger, each of which is capable of fighting off a small fleet. These orbital stations are powered by antimatter generators, making them useful not only against spaceborne invaders but also against the capital's population (as a check against rebellion, as they face a network of the largest bombs known in orbit).(FASA RPG module: The Klingons: Star Fleet Intelligence Manual)

In an alternate reality where Bajor and the Bajoran wormhole remained under Cardassian control, the Dominion formed an alliance with the Cardassian Union and targeted Qo'noS in a Jem'Hadar attack. Over 100 Jem'Hadar ships left Cardassian space for Qo'noS, and while only 40 ships actually made it to the planet, they were still able to inflict considerable damage to the Klingon Defense Forces. As the battle raged, five Jem'Hadar ships focused their attention on the planet, entered the atmosphere, and bombarded its surface. Billions were killed, including Worf's brother Kurn, who sat on the Klingon High Council.

By this time, the USS Defiant, under the command of Worf, had entered the system and begun to attack the Jem'Hadar fleet, but it was unable to stop the planetary bombardment. Scans of the surface revealed that the First City had been entirely destroyed and that only a few thousand survivors remained on the planet.

With news that an additional 20 Jem'Hadar ships were approaching the system, Worf ordered the Defiant into Qo'noS's sun with plans to initiate a warp core breach that would then cause a supernova, destroying the system and the Jem'Hadar fleet. The attack and destruction of Qo'noS left the Klingons significantly weakened to the point that the remaining two Founders trapped in the Alpha Quadrant no longer considered the Klingon Empire to be a power in the region. (Myriad Universes novel: A Gutted World)

In 2261 of the Kelvin timeline, Qo'noS came under attack by the Romulans and their Section 31 allies. (TOS - The Khitomer Conflict comic: "Part 2") 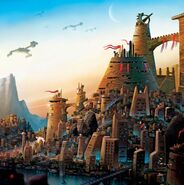 The First City, the capital city of the Klingon Empire. 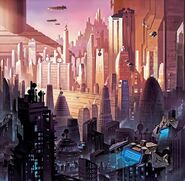 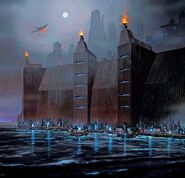