For other uses, see Quarantine.

The Original Series (US Comic Strips) No. 10

7708.3 - 7717.5
"Quarantine" is a Star Trek: The Original Series comic strip. It is the tenth story in the US Comic Strips series, published daily in newspapers over a period of 14 weeks by the Los Angeles Times Syndicate in 1981. The story was set during Captain Kirk's second five-year mission aboard the refit USS Enterprise. In this story, the Enterprise visits Sarsithia to help rebuild a civilization following 450 years of war.

Captain's Log: Stardate 7708.3.
The Enterprise has answered a medical distress call from the planet Sarsithia, in Star Cluster M-21… During the last 450 years, the Sarsith have fought to rid their planet of the Mirmonot, fierce invaders from another star system… The last Mirmonot stronghold, Isoth Fortress, has fallen and the Ruling Council has asked the Federation for aid...

Sarsithia was located near a disputed border between the Federation and Klingon Empire. Aid was requested to help isolate the spread of a plague. Spock links the ship's medical computer with one on Sarsith, so Dr. Chapel can compare blood samples and afflictions with those of other amphibian species. Special care has to be taken with the samples; although immune, humans can become carriers of the disease.

Captain's Log: Stardate 7708.3.
The Enterprise has answered a medical distress call from the planet Sarsithia. Its ruling council has asked the Federation for aid in combating a plague… Mister Spock and I are in conference with the Sarsith Ruling Council...

Councilor Arvith invited Kirk and Spock to "share the water" in their council chamber, where discussions were made while seated in water. Kirk and Spock both seem uncomfortable with the idea of disrobing, but put their feelings aside for the sake of diplomacy. Arvith explains that their entire culture had been based on removing the invaders. Having succeeded, they were now without direction, enduring famine and economic collapse. General Onoth intrudes on the meeting. He leads an influential, elite faction of their military known as the Brotherhood of Waters. Onoth says the council has become ineffectual, but says he's come to bring news that Chapel has been in an accident.

Chapel had accidentally broken a test tube, exposing herself to the pathogens within. She drove an amphibious craft to retrieve other samples, but her body numbed and she passed out, crashing the vehicle. She was being cared for by Dr. Tath at a medical center.

Captain's Log: Supplemental.
Dr. Chapel has suffered severe injuries in an accident. We are on our way to Isoth Fortress' medical center, accompanied by General Onoth, controversial leader of the "Brotherhood of Waters," an elite military society. Dr. McCoy is beaming down... Postwar famine and plague are serious problems facing the Sarsith. Their 450-year effort to push the Mirmonots – invaders from another star system – from their planet has led to wide-scale unrest and caused economic and social collapse.

Walking with Onoth in public, Kirk and Spock come upon a staged demonstration where one of Onoth's men fights a civilian over scraps of bread. After arriving at the medical center, they are told by McCoy that the plague within Chapel has mutated into a new form and has to be further researched. Privately, Onoth speaks with Dr. Tath, a member of his Brotherhood, ordering that Chapel not recover "too rapidly."

Suddenly a blast tears through a nearby wall. Kirk orders a security team to the surface. Lt. Chekov, Sergeant Umeki and three others beam down as several Sarsith fire beam weapons through the open wall. They panick when they recognize Onoth, who decries them as "common scum" and shoots them all. Some of Onoth's men hold Kirk, but release him at Chekov's urging.

The Enterprise beams down emergency rations for the public drawn from Portable Kitchen Units, feeding thousands of idle soldiers and civilians around the fortress. Onoth becomes more desperate, thinking the Sarsith need a new enemy to focus their attention. Secretly, he assigns Brothers Avoth and Nath to a suicide mission. They fly a fighter out of the system toward Klingon space, find the nearest Klingon cruiser, attack it, then lead it back to Sarsithia.

The plague has been identified as similar to one on Beta Quaternas IV, a planet also visited by Mirmonots, and McCoy prepares a serum. Fearing that Chapel will soon awaken, Dr. Tath injects her with a mild sedative to slow the serum's effects. It has the opposite effect, however, giving her amnesia, paranoia and making her prone to violence. In panic, she belts Kirk, knocks down Umeki, and levels a phaser at them. Guessing from the fortress that she might be on a prison planet, she flees to a spaceport, taking off aboard a small ship before Chekov and Umeki can stop her.

Captain's Log: Stardate 7715.3.
A Klingon vessel, pursuing and firing upon a Sarsith fighter, is approaching the Sarsith star system… and we suddenly find ourselves in the middle of an intergalactic incident...

Captain Kolak follows Avoth and Nath's fighter, finding themselves seemingly led straight to the Enterprise. Kolak concludes this was a Starfleet trick to incite war. Kolak manages to destroy the evasive fighter, but Rand is able to beam up Avoth and Nath.

Captain's Log: Stardate 7715.4.
A Klingon imperial cruiser has destroyed a Sarsith fighter... and we are now involved in an intergalactic incident which could result in a war...

When Rand brings Avoth and Nath to the bridge, Kirk realizes what Onoth had been planning.

Captain's Log: Supplemental.
We must prevent Doctor Chapel from reopening the conflict set in motion by General Onoth. She is in control of a stolen Sarsith ship, and we have the difficult task of trying not to accidentally harm her. Doctor McCoy is desperately trying to find the key to the illness that's causing her violent actions...

Motivated by the seemingly unprovoked destruction of a Sarsith fighter by Klingons, the Sarsith military rallies, and Chekov reports that an armada of Onath's warships have launched. Chekov and Umeki beam up as the armada begins attacking the Klingon cruiser. Kolak's ship retaliates, destroying several of Onath's warships, but begin to take damage. Meanwhile, McCoy exposes Dr. Tath's tampering and realizes Chapel needs immediate medical attention.

Captain's Log: Stardate 7716.3.
Doctor Chapel will die very soon, if a heart depressant is not administered to counteract the sedative given her by Tath, General Onoth's physician. Mister Spock has volunteered to attempt this, but he will be forced to wait. Against my orders, Onoth has attacked the Klingons.
Captain's Log: Stardate 7716.3.
Without warning, General Onoth has broken the truce and attacked the Klingons. To make matters worse, my first officer has disappeared!

Spock leaves the bridge and has Rand beam him aboard Chapel's ship. But with shields down, the Enterprise becomes open to attack by Onoth.

Captain's Log: Supplement.
The Enterprise is under attack by General Onoth. We must assume he has decided to destroy us as well as the Klingons. Spock is aboard Doctor Chapel's ship... He has administered a heart depressant to her. However, we dare not lower our deflector shields for one instant to beam them aboard.
Captain's Log: Supplement.
General Onoth has decided to destroy the Enterprise as well as the Klingons. We are under fire and Spock cannot return with Doctor Chapel because we cannot lower our deflector shields to beam them aboard.

Repeated attacks by Onoth's fleet finally disable Kolak's forward shield. His patience worn thin, Kolak retaliates by destroying Onoth's ship. The rest of the armada quickly falls back. But with his ship vulnerable to the Enterprise, Kolak orders a call for reinforcements and a retreat at warp six. Rand quickly beams Spock and Chapel back to the Enterprise, and Chapel is immediately taken to sickbay.

Captain's Log: Stardate 7717.5.
The Klingons have killed General Onoth. With him dies the plan to involve Sarsithia in a war. Avoth and Nath, two of the general's men, are returning to their planet in Doctor Chapel's stolen ship. Perhaps now the Sarsith can learn a new way of life... However, the Klingons do not know the incident is ended. Their cruiser sustained heavy damage during Onoth's attack, and they are retreating in order to send for reinforcements. We must try to reason with them, or they will return and destroy Sarsithia.

The Enterprise pursues at warp six. 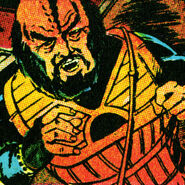 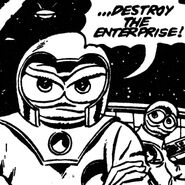 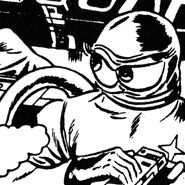 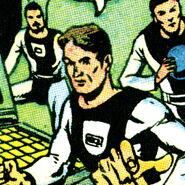 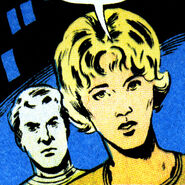 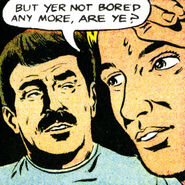 Guards in the security stand-by lounge.