Ra'ch B'ullhy was a Damiani politician in the 24th century. 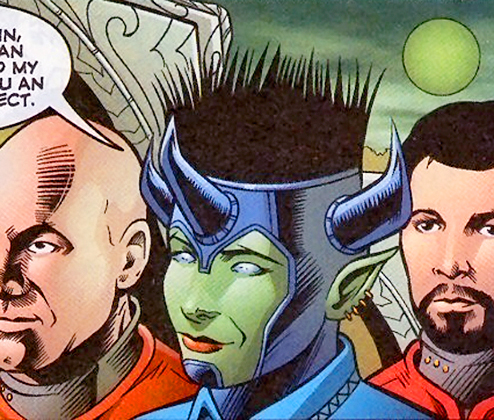 She was chief of staff to Damiano planetary governor Es'sa G'ullho, and then one of Damiano's first representatives to the Federation Council after its acceptance into the Federation. In 2370, she was elected to succeed Es'sa as governor. (TNG comic book: Perchance to Dream)

Ra'ch returned to the Federation Council after serving as governor. In 2379, following the resignation of Federation President Min Zife, she was elected president pro tem by the Council, until a special election could be held. (novel A Time to Heal).

Retrieved from "https://memory-beta.fandom.com/wiki/Ra%27ch_B%27ullhy?oldid=3189"
Community content is available under CC-BY-SA unless otherwise noted.