Raise the Defiant was a 30-page Star Trek: The Original Series comic book story, a sequel to TOS episode & Star Trek 5 novelization: The Tholian Web. It was the first of two stories included in Star Trek Special, Issue 2, published in Winter 1994 by DC Comics. This was author Kevin Ryan's only TOS story not set in the 2260s. In the story, the USS Enterprise-A was assigned to recover the USS Defiant.

Captain's log, stardate 8544.9. The Enterprise has been asked to assist a Doctor Jurad [sic] with a highly classified experiment.

Doctor Allison Juram arrived via shuttlecraft to brief James T. Kirk on their mission. She was brusque, overbearing and argumentative, particularly when Kirk included his senior officers in the briefing, even though all were involved in the USS Defiant incident 20 years ago. Juram revealed that Defiant's predicament had been a result of testing a prototype phaser inverter. The inverter remained active, creating an ever-expanding region of spacial instability which now posed a threat to Tholian and Federation space. Montgomery Scott believed that they use a phase inverter brought by Juram to recreate the phase experiment and locate the Defiant.

To maintain a lock on their universe, a sensor probe with a subspace transmitter was launched. The Enterprise then rendezvoused with three Tholians starships led by Commander Melene, who doubted Starfleet's stated purpose. Melene's ship fired on the Enterprise at the right moment of interphase, shifting it into another universe, but not the right one. However, Scott detected a resonance pattern which linked their phase inverter to the one aboard the Defiant. They followed the resonance pattern, risking a second trip through interspace, and arrived beside the Defiant.

Because time flowed significantly more slowly in this universe, Leonard McCoy estimated that only a few hours had elapsed for the Defiant. He modified his theragan antidote for interphase-induced psychosis to be less intoxicating, just in case it was needed. Spock calculated their return trajectory while towing the extra mass of the Defiant, but as they were about to begin interphase, a feedback loop was triggered in their subspace inverter – sabotage. Their tractor beam, shields and helm suddenly went offline.

Juram's shuttle fled from the hangar bay. As its weapons powered up, Juram confessed to being a Romulan operative. The Romulan government would not allow Starfleet to retrieve test results for phasing technology, particularly since that equipment could see through any cloaking technology and upset the balance of power. Destroying both active phase inverters would produce a chain reaction to devastate large regions of Tholian space, provoking a war that would eventually draw in the Klingon Empire, leaving the entire region weakened and ripe for Romulan conquest.

Scott appealed to her to stop, one engineer to another, but Jarem replied that Romulans were obligated to perform their duty. She activated her weapons – but instead, the shuttle self-destructed. Scott had sabotaged the shuttle's weapons. He'd become suspicious of her when she suggested a Romulan engineering solution to a technical problem, and especially after she suggested leaving the Defiant behind, something Scott felt no true engineer would ever have said. Scott retraced their path back to the primary universe. 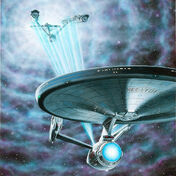 Recovery of the Defiant in 2288.
Add a photo to this gallery

Retrieved from "https://memory-beta.fandom.com/wiki/Raise_the_Defiant?oldid=650995"
Community content is available under CC-BY-SA unless otherwise noted.