The Original Series (IDW ongoing) No. 20

2256/2259
"Red Level Down" was the twentieth issue of IDW Publishing's ongoing series of Star Trek comics. The stand-alone issue was an original story focused on the characters of Hikaru Sulu and Pavel Chekov. The story was written by Mike Johnson with art by Claudia Balboni, Luca Lamberti and Erica Durante.

The all-new origin stories of the Enterprise crew conclude with this special issue that focuses on TWO Trek Stalwarts: Sulu and Chekov! Witness their first meeting at Starfleet Academy, and learn how their paths intertwined all the way to the bridge of the Enterprise!

Sulu is considering joining the Red Squad. The squad leader, Amy McKenna, has a plan for that. Meanwhile, James T. Kirk helps a cadet named Pavel Andreievich Chekov back on his feet. Sulu is on a shuttlecraft with a partner named David Reed. In the dorms, Kirk and Chekov talk about the Kobayashi Maru scenario when Gaila arrives. On Federation Day, McKenna gets the Admiral's Award for Excellence. David Reed messes up the shuttlecraft that he and Sulu just as Chekov helps Kirk cheat at the Kobayashi Maru. Chekov saves McKenna from being impaled. Meanwhile, Sulu and Reed get the shuttle under control. Afterwards, Sulu refuses to join the Red Squad in front of McKenna. Months later, Sulu and Chekov meet on the Enterprise.

2258
Sulu and Chekov meet before joining the bridge crew of the Enterprise. 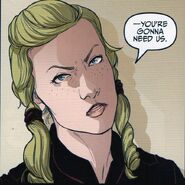