Captain's log, stardate 51124.8
Night has fallen on this amazingly lush planet in the reputedly barren Denar system and our unlikely quartet of allies is no closer to having found that ancient relic of untold power than when we began this quest this morning.

Commander Durin tries to nurse Doctor Teraz's injuries but the Phage undermines all his efforts and after a while he starts to wounder about Captain Janeway and Maje Kul'Lar. Followed by Teraz they head into the jungle an enventualy stumble upon Janeway who tries her best to release Kul'Lar from the Guardian's tight grasp.

Captain's log
Considering that our little group consists of a Kazon, a Vidiian and a Trabe--enemies we have made since Voyager's arrival in the Delta Quadrant... our lack of success--on his first day of our journey--doesn't surprise me one bit. A this particular moment, however... I just hope we survive to see the light of a second day.

Kul'Lar's predicament worsens when Janeway strikes the Guardian's arm with her torch as he tightens is grip on the Kazon's body causing him to drift into unconsciousness. The Guardian now uses Kul'Lar's unconscious body to strike at Janeway who implores Durin and Teraz to help her. Durin for his part sees an opportunity to get rid of two enemies at once and tries to talk Teraz into leaving to their fate. Teraz promptly refuses and reminds Durin that they need to be together to achieve their quest and also refuses to reward Janeway's previous kindness towards him with treachery, especially when Durin himself wanted to abandon him to his death.

First officer's log, supplemental
As if the crew's low morale level isn't bad enough -- what with fuel and resources in such short supply, but the prospect of returning to our homes seventy-thousand light years away has just gotten much slimmer, now that we've lost all contact with the captain, and are surrounded by three of our greatest enemies. If the Vidiians strike first, they'll attempt to steal our vital organs, hoping that these spoils can help them battle the "Phage" threatening their existence. A Trabe attack will result in rampant death and destruction. Those unlucky enough to survive will likely be enslaved for the reconstruction of these supremacist's lost empire. And I'm certain the Kazon assault will be as swift as it is savage. Anything to hasten the acquisition of our advanced technology they so covet. Still, this isn't the first time Voyager has faced such seemingly insurmountable odds. So, if I have any say in the matter... it's not going to be the last!

On the bridge of the Federation starship USS Voyager, Commander Chakotay is furious and wants to know why his order to fire was not followed by Lieutenant commander Tuvok. Tuvok calmly explains that this Maquis tactic, called Phantom, that Chakotay wishes to execute is highly unorthodox and unsanctioned by Starfleet, he is also troubled that Chakotay would fire first at ships that found themselves in seemingly neutral positions.

Chakotay acknowledges Tuvok's point but explains to him that his strategy will tie up the computer systems for a while and he would rather be on the offensive when their "friends" decide to attack. Tuvok recognizes that is responsibilities as Chief of Security, that demand that he do anything to keep the ship and crew safe. Tuvok uploads a command to the Kazon ship.

The Kazon sensors reports that they have been fired upon and that they are their shields are down to 63 percent. Thought they did not feel the impact, their computer show that the Trabe ship fired upon them. The Kazon commander suspects that the Trabe have developed a new weapon and orders for his crew to fire back at the Trabe. On the bridge of the Trabe ship, chaos reigns after the weapon impact hits the ship and damages their weapon guidance system. Causing for their retaliation to hit the Vidiian ship. The second in command on the Vidiaan ship gets a report that they have a casualty and are now "dead in space". With their systems overloading he orders for repairs before their life system is affected.

Operation's officer personal log
it's been over a day since Lt. Tom Paris and I got thrown into the brig for brawling in the messhall, and neither one of us is any closer to apologizing. Some "friends" we are.

In Voyager's brig, Ensign Kim still tries to release himself and lieutenant Paris. Paris tells that there's little chance that he will succeed. Kim answers that sometimes it pays to bend the rules, Paris replies that he knows its hard being on the other side of the galaxy but sometimes its best to follow the rules. Kim is say that as he doesn't seem like the type that follows rules. Their conversation gets cut short when the ship gets rocked by a turbulence, which leads Paris to suspect that something is wrong in engineering.

Chakotay asks Chief Engineer, Torres, for a status report. She tells him the internal systems are in complete chaos and that the ships systems will take some time before they can re-established. Chakotay answers that on the bright side, since all three enemy ships are disabled Voyager should take a lot less time to repair then an old Maquis ship. With repairs under way, Chakotay focuses on recovering Janeway.

Back on the planet, Janeway and Teraz do their best to fight off the Guardian, as Durin keeps hoping for the demise of his comrades. Kul'Lar notices Durin hiding in the bushes and calls him a coward for his behavior. Janeway tells the Kazon to ignore Durin as she as devised a stategy to take down the beast. Using Teraz organ extractor she heats up a piece of sharp metal an stabs the creature. Knowingly maiming it instead of killing it. The injured beast releases Kul'Lar and flees.

Suddently Bonai's voice sounds, telling the group that they have succeeded in their quest. Before them now stands the relic constructed by the Order. Durin leaps towards the relic, closely followed by Kul'Lar. Janeway warns them not to touch the relic before they can analyze it. Unfortunately, they both reach the relic, as they touch it. Unable to break contact with the object, they are consumed by an energy wave that reaches the Kazon and Vidiian ships in orbit and disintegrates them.

On the bridge, Chakotay asks Tuvok if he can locate the source of the wave. Tuvok answers that the wave was too fast even for Voyager's sensors to analyze. Chakotay then orders Tuvok to look for lifesigns along the blast's path.

Planetside, Bonai, appears to Janeway and Teraz, saying that the game reaches its end. Janeway is appalled that Bonai refers to their tribulations as a game. He further explains that this was an elaborate test to see which of their races was worthy to join the Order. Bonai explains that they will see themselves again before the storm. As he disappears, communications with Voyager are re-established and Janeway and Teraz are beamed back to the ship.

Back in the transporter room, Janeway and Teraz take a moment to bid farewell to each other.

Captain's log, supplemental: We've left the Denar system behind us, and things are finally starting to come back to normal for my much beleaguered crew... Well at least for most of them... And with the dangling tread tied. There is one last loose end to knot... Specifically regarding the events that transpired on board in my absence.

Tuvok escorts Paris and Kim to the mess hall where Neelix is waiting for them to clean up as part of their punishment. Chakotay arrives in Janeway's ready room. She congratulates him on his action and the strategy he used even if it might have turned dangerous for the ship's crew. He explains that he relied on his instincts and that he will do so when necessary. 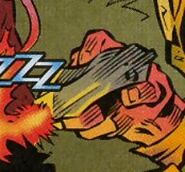