Relicquest, Part One was the sixth issue of Marvel Comics' 1996 series of Star Trek: Voyager comics and the first to feature Ben Raab as a writer and John Kalisz as colorist. The issue consisted of a 22 page story penciled by Jesus Redondo and inked by Sergio Melia, with Bobbie Chase, Mark Paniccia and Tim Tuohy credited as editors.

Captain's log, stardate 51123.9.
...It's been so long since last we touched down to refuel and restock Voyager's supplies, I’ve lost track of time. But it’s been two months...That seem like two standard years. Unfortunately, i'm not the only one being affected. The situation is starting to weight heavy on the crew, as well. Tensions are flaring. Even a crew used to hardship and life in this unexplored region of space can't keep morale up without blowing off some steam. I fear if this continues much longer... Some of them are going to break.

In Voyager's mess hall, Ensign Kim is furious to see Lieutenant Paris sit at his table. He calls Paris a self-serving, irresponsible liar before getting up and punching him. Paris falls onto security officer Mehar. The Bajoran gets mad at spilling over her Kohlanese stew and Tarkalean tea, so she grabs Kim and toss him onto Paris. Kim and Paris recover only to keep fighting each other. Neelix is alerted by the ruckus and decides to peep over is counter and a plethora of object are thrown in his direction. He ducks in time to avoid a knife and alert Chief of Security Tuvok of the situation.

The fight is broken up in less then five minutes, Paris and Kim are taken to the brig where Captain Janeway shares her disappointment at their behavior. She tells them that they will remain in their holding cells until Voyager's next pit stop, whenever that may be. AS she and Tuvok head to the turbolift, Tuvok informs Janeway that this even is not the first event of random misplaced aggression. Janeway answers that she's aware of the crew's exasperation but until they come across a Class M planet the only thing she can do is keep them sane.

When they exit onto the bridge Commander Chakotay reports that sensors have picked up a Class M world with abundant life. Janeway summons Neelix to the bridge. Tuvok reports that there are no life signs and confirms Chakotay's previous sensor readings. When Neelix gets to the bridge, Janeway asks him about the planet displayed on the viewscreen. Tuvok informs Neelix that Voyager is 3 light-year into the Denar star system. Neelix says that that is impossible as every world in this region as been inhabitable since the arrival of The Order a millennial ago. Neelix recounts the history of seven representatives of the Denarrian worlds who joined to bring technological advancement to the rather primitive system. Unfortunately one of them invented an object capable of destroying an entire system, the object was psionicly powered by an individual’s thoughts and was used on the Denar system. Janeway orders an away team to meet her in the transporter room to lead an investigation of the planet. Chakotay asks to see her in her ready room before she leaves.

In the ready room, Chakotay confronts Janeway about her attitude and tells her that the crew looks up to her for an example and that she needs to take things easy. Chakotay makes a comment about the Maquis rebellion that leads Janeway to snap back that Voyager is not a Maquis ship and that no sacrifice, mental or physical, is too great and she expects the same from her First officer. Chakotay leaves to prepare the away team leaving Janeway wondering how far she's willing to go to bring her people back to the Alpha Quadrant.

In the brig, Paris tells Kim that he didn't have to hit him, Kim answers that Paris should have been there to study the spatial anomaly that Kim had picked up. Paris replies that Kim should find someone else for his experiments and that he is tired of going out of his way to make his life fun. The arguments heats up to the point where they both forget about the brig's force fields and get knocked unconscious.

Captain's log, supplemental
To beam to this planet that Mr. Neelix says doesn't exist... We must first navigate through the asteroid belt surrounding it. I can't imagine what we are going to find once we penetrate it. I only hope there's something down there that can help us.

On the transporter pad Janeway grows impatient waiting for the ship to clear the asteroid belt. Kes notices and ask Janeway if she's okay. Janeway answers that she's just anxious to get underway. When Voyager clears the belt, Lieutenant B'Elanna Torres beams the away team to the surface of the planet. After the transport she picks up unusual reading closing in on the team’s location.

On the surface, there is no radiation and Kes’s tricorder registers large amounts of consumable vegetation. As they walk Janeway ears so noise coming form some bushes. She approaches to see what it is. A large and menacing feline like creature pounces on her forcing Tuvok to fire his phaser at the beast who is unaffected by the stun setting. Suddenly a voice calls the creature back. The away team turns to see a tall green skinned humanoid who introduces himself as Bonai and express the honor it is to welcome them. Tuvok whispers to Janeway that the alien does not register on the tricorder. He candidly answers that he won’t show up on sensors because he is not alive.

Surprised by the statement, Janeway asks what is his origin but he answers that he can say no more in front of the others and with the wave of a hand he teleports them back to Voyager who is now picking up three other ships in the vicinity. Janeway asks engineering to beam her back to the ship. Before she can leave He explains that the best way to help her crew is to help him first in his quest to find a powerful artifact that could restore his people and send ‘’Voyager’’ back to the Alpha Quadrant. She asks what happens if she doesn’t help, to which he simply answers that he will turn to his other recruits, a Vidiian, a Kazon and a Trabe. Reluctant to let any of those species gain such power, she accepts to help Bonai.

Who is this alien... And why does he want Captain Janeway?!

Janeway in her ready room

Kim and Paris in the brig

Kim and Paris fight in the mess hall 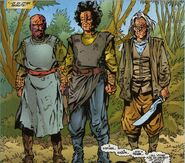 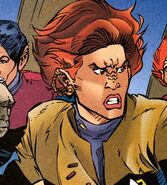 Kohlanese stew
Add a photo to this gallery

Retrieved from "https://memory-beta.fandom.com/wiki/Relicquest,_Part_One?oldid=666010"
Community content is available under CC-BY-SA unless otherwise noted.