51123.9
Stan Lee and Paramount Pictures present: Relicquest, Part Two was the seventh issue of Marvel Comics' 1996 series of Star Trek: Voyager comics, featuring Ben Raab as a writer and John Kalisz as colorist. The issue consisted of a 22 page story penciled by Jesus Redondo and inked by Sergio Melia, with Bobbie Chase, Mark Paniccia and Tim Tuohy credited as editors.

In the brig of the Federation starship USS Voyager, Lieutenant Paris and science officer Ensign Kim, lay unconscious on the floor. As Paris wakes up and tells to a still unconscious Kim that starting a food fight in the mess hall was dumb but being knocked-out by the brig’s force field is even dumber. The red alert sounds through the ships communications system. Paris assumes that Voyager is yet again under attack. In the engineering section of the ship a security team lead by officer Mehar secures engineering as Lieutenant commander Tuvok asks for their status, one of the teams members notices that Tuvok almost sound tense over the comm. Mehar tells the officer that it means they need to stay sharp.

On the bridge, Tuvok reports to Commander Chakotay that security teams are at their posts and that life support has been de-activated in the transporter room, cargo bay and Jefferies tubes. He also mentions that he is now re-routing all available power to the defense system. Chakotay orders form Kim and Paris to be released, Tuvok notes that it’s not standard Starfleet protocol and that it goes directly against Captain Janeway orders. Chakotay answers that he is willing to go against any order or protocol in order to protect Voyager and its crew.

First officer's log, supplemental
With Captain Janeway stranded on the planet below us… And a situation that which would make the Kobayashi Maru look like a rookie’s dream maneuver… I'm afraid that Starfleet standard operating procedures may not be enough to protect the crew. That’s okay. I have plenty of Maquis tricks up my sleeve.

The sensors reveal that Voyager is surrounded by a Vidiian, a Kazon and a Trabe starship. The Vidian accuse the Kazon for the abduction of Doctor Teraz, the Kazon are prepared to spill blood for Maje Kul' Lar. The Trabe for their part rejoice at the opportunity to make anyone pay for the disappearance of Commander Durin.

Chakotay raises Lieutenant Torres in engineering and informs her that he's going to need the Ghost. Torres reminds Chakotay that the stunt almost tore apart the strongest of the Maquis ships and given the current state of Voyager's resources, she as no clue what might happen to the vessel. Torres is even more doubtful when Chakotay informs her that she only as ten hours to get Ghost ready.

Captain's log, supplemental
When the away team beamed down to this lush’s planet surface, searching for food and resources to revitalize Voyager's and its crew… Not only were we unprepared to meet any humanoid inhabitants let alone one with preternatural powers as this Bonai seems to possess but the last beings I expected to encounter were the Kazon, the Trabe and the Vidiians!

On the surface an armed Janeway faces the three other aliens who also point their weapons on the captain. Bonai tries to calm them down but Janeway is in no way ready to lower her phaser after being lead into an ambush. Kul'Lar takes the opportunity to move in on Janeway but Durin and Teraz have the same idea and decide to get rid of the Kazon. They press their weapons on the Kul'Lar's head and pull their triggers but nothing happens. Kul’Lar takes advantage of the surprise and disarms Durin and Teraz who find themselves on the ground. Kul'Lar fires at them but nothing happens again.

The next second Bonai stands with theirs weapons in his hands. Janeway asks him what he needs them for as he obviously possesses powers greater then theirs. Bonai simply says that he wants a chance to give one of them all the opportunity to receive their greatest wish. He offers the Vidiian an end to the The Phage, to the Kazon a technological renaissance to unite his people, to the Trabe a return to their golden era and to Janeway, he offers to return Voyager to the Alpha Quadrant. Before disappearing Bonai says that to achieve this all they have to do is cooperate. Janeway tries to bring the others to agree to cooperate for the moment. Kul'Lar answers that they are free to join him in the quest at their own risk and heads in the jungle.

In the brig, Kim finally regains consciousness and asks Paris about the red alert. He says he doesn't know but suspects it’s bad and expects someone to let them out soon. Kim answers that he doesn't think so and that they stuck there until Janeway orders otherwise. Paris complains about their situation but Kim as plans of getting out. He takes a tool out of his boot and starts to temper with the brig's control panel. As Kim works he tells Paris that he doesn't understand his friend would just sit back and accept their captivity, he asks Paris why he left the penal colony, where he could of lived out is sentence, to accept Janeway's offer. Paris thinks about what Kim just said but can't bring himself to answer is Kim.

In the surface's jungle, the group of captains find themselves lost. Durin asks why they are following a woman who can’t find her way back to her own space. Kul’Lar answers that it’s because Trabe have no sense of direction. As they tease each other, Teraz falls behind and collapse, tired by the phage and the traveling. Teraz urges them to press on but Janeway says he needs to stop and helps him sit next to a tree so he can catch his breath. Durin suggests abandoning him if he can’t keep up. Revolted, Janeway turns to Durin and asks whit would he have them do if it was him, would he have them leave him on and uncharted planet unaware of the lurking dangers. Durin gives in to Janeway but says that Teraz will get no help from him. Janeway offers her shoulder for support to the Vidiian captain as the group resumes their trek. Teraz asks Janeway why she's helping him. She replies that he’s as much a part of the team as any other and that a good captain never leaves a man behind.

As night falls the group settles camp, as Janeway looks over Teraz, Durin and Kul’Lar sit at the fire. Kul'Lar share is intentions of uniting his people with the new found power. Durin laugh at his ambitions and tells him that Kazon technology will always look primitive compared to his peoples second golden era. Insulted Kul'Lar reaches from a torch and lunges towards Durin. Before he can reach Durin, Janeway brings their attention to noises coming from the thickets. She grabs the torch and rushes back into the jungle.

Durin tells to Kul'Lar that if she gets killed the mission will be lost. Seeing an opportunity to get rid of Janeway, he grabs another torch and rushes behind her as he tells to Durin to watch over Teraz. Kul’Lar catches up to Janeway and asks her why she shows such clemency to her enemy. If the situation was any different he would kill her and her crew in the name of the many Kazon lives she as claimed. She turns and tells him not to make threats that he can’t keep. Before they can continue the argument, the noise sounds again. Before they can react a large furry claw grabs Kul'Lar and drags away. Janeway sees no other option then to go to Kul'Lar's rescue.

In orbit the four starships still hold a tense face-off. Chakotay opens hailing frequencies and sends a message stating that they in need of fuel and supplies and are not on a hostile mission. The others ships rejoice at Voyager's weakened state seeing an easy target. On the bridge Tuvok mentions to Chakotay that he as just revealed all the information needed for them to take advantage of their status. Chakotay answers that he is sadden that Tuvok didn't learn more during his time as a Maquis and reminds him the first rule of guerrilla warfare; turning your greatest weakness into your greatest strength. The Kazon ships orders Voyager surrender. The Trabe refute the Kazon claims to this sector of space. The Vidiian do the same to the Trabe's claim.

As the three ships close in on Voyager's location, Chakotay asks Torres if the Phantom is ready. She answers that she doesn't know how she did it but it's ready and that he owes her big time. Chakotay agrees to settle the debt over a few pints of Klingon Blood wine later. The commander informs Tuvok that things are about to get weird and that he needs the crew to be remain on their toes. Voyager assumes an attack position of its own and Chakotay orders Tuvok to open fire.

Captain Janeway battles the guardian of the Relic! 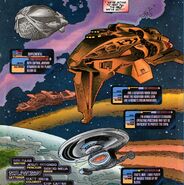