For other uses, see Renewal.

7413.2 - 7414.1
"Renewal" was the debut issue of the TOS Untold Voyages miniseries published by Marvel Comics in 1998. The story begins at the final moments of TOS movie: The Motion Picture, depicting the start of the refit USS Enterprise's shakedown cruise for Captain Kirk's second five-year mission.

The Enterprise's shakedown cruise is interrupted when a squadron of Klingon battlecruisers attempt to seize the refit starship. Kirk disables the lead vessel by channeling all phaser power through the engines, delivering a massive blow that disables both the battlecruiser and the Enterprise. Kirk's bluff that this is a viable weapon convinces the Klingons to retreat, and Admiral Nogura is finally swayed to allow Kirk to remain in command.

The Enterprise vs. the Klingons 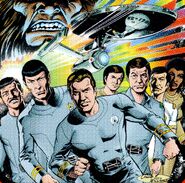