For other uses, see Requiem.

When Deep Space 9's power generators begin to fail, Sisko invites the former Cardassian engineer of the station to assist O'Brien; Kira discovers the diary of a young Bajoran girl who lived during the Occupation.

During the Occupation, Cardassian soldiers interrogate a Bajoran woman. They have already killed her husband to force the woman, who they call Trika but who says that she is Malor Bet, to reveal what she knows.

Two years later, DS9's main reactor explodes and Chief O'Brien begins to repair what he can. The station now has only one working reactor, so Commander Sisko suggests that it may be possible, but difficult, to bring the other reactors online. The SCE were unable to repair the reactors, so Sisko suggests getting O'Brien help from elsewhere and asks Dulath, engineer when the Cardassians ran the station, to come to DS9. Dulath soon arrives, and he and O'Brien quickly clash, but begin repairs.

During repairs, O'Brien finds a crawlspace with a working generator but no one in the area, just a diary. Kira discovers that the diary was written by the young daughter of Malor Bet, a resistance leader known as Trika. Malor's daughter mentions in the diary that she is hiding in the station core from the Cardassians after her mother disappears. Quark is also mentioned in the diary, and he gave food to the girl.

Kira confronts Quark, who doesn't remember the girl, but Dulath does. The girl's name was Malor Ti. Dulath doesnt know what happened to her after her mother was executed, but provides Kira with a confidential Cardassian dossier on Malor's mother, who led the Bajoran Resistance on the station. Kira creates a hologram of Malor Ti based on her diary. 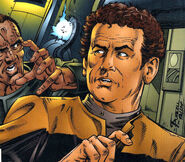