Resistance is the sixth issue of John Byrne's Star Trek: New Visions comic series. It was published in May 2015.

In the latest Star Trek photonovel adventure by John Byrne a distant Federation frontier world suddenly goes silent and Captain Kirk and the crew of the Enterprise must follow a path of destroyed planets while pursuing a mysterious hostile vessel from the Delta Quadrant.

A forced-core implosion had reduced the planet to asteroids. Starfleet reported seven other star systems had gone silent. The Enterprise traveled to the first destroyed system and rescued a lone survivor on a small planetary fragment. Doctor Kalwany said that invaders had stolen a mining device from their world, turned it into an implosion weapon and used it to destroy his planet.

The Enterprise pursued an energy trail and discovered a small spherical vessel emitting extremely high levels of radiation. The life readings aboard were unusual, as if body parts were scattered throughout the ship, and from their actions might have been dying and driven insane from the radiation. The vessel ignored hails and fired its implosion weapon whenever the Enterprise got too close. Kirk had little choice but to retreat outside its defensive perimeter.

Captain's log, supplemental: Our deadly game of tag with the alien ship has continued now for three hours. Helmsman Sulu's superb piloting skill have kept our damage down to a minimum, but how long…

The alien vessel headed for the Tau Gamma system, population 15 billion. Even as radiation killed its remaining crew, the ship transmitted a regular signal that defied translation. Kirk tried beaming up survivors, but the vessel opened fire. Spock and Montgomery Scott figured out how to implode the implosion weapon by redirecting the starship's warp engine output into the alien vessel, producing a microscopic black hole. Though the margin of error was small, they succeeded in destroying the alien vessel and saving Tau Gamma IV.

Captain's log, supplemental. Science department has completed three days of intensive study of the region around Tau Gamma IV. There is no trace of the mysterious intruder. Or the microscopic black hole briefly created by their destruction. Nyota Uhura at last translated the aliens' signal: "Resistance is futile". 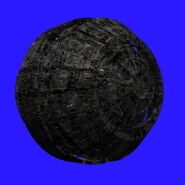 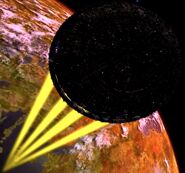 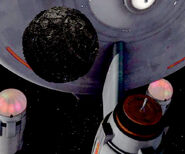 Borg sphere alongside the Enterprise 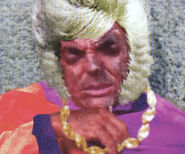 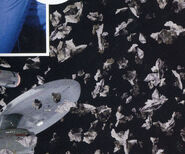