April 2380
Resistance is a Star Trek: The Next Generation novel by J.M. Dillard published by Pocket Books in August 2007. It is the second novel in the post-Nemesis TNG continuity and centers around the crew of the Enterprise fighting a stranded Borg cube.

The U.S.S. Enterprise™ is ready to rejoin the fleet. The body of the great starship -- which managed to survive the deadly Romulan-Reman attack only with Data's ultimate sacrifice -- has been restored.

With the departure of first officer William Riker and ship's counselor Deanna Troi, Picard has to replace two of his most trusted advisors. A Vulcan is granted the commission of ship's counselor. Logical and pragmatic, T'Lana is a highly decorated member of Starfleet who served with distinction during the Dominion War. For his Number One, Captain Picard has only one candidate: Worf.

The captain is looking forward to putting the shadows of war behind him, shaping his new crew, and returning at last to being an explorer. However, the Klingon refuses the promotion. And Picard senses that his new counselor does not approve of Worf.

Starfleet hands the Enterprise a simple assignment perfect for a shakedown cruise. Picard is confident that this is all he needs to bring his crew together. Before the mission commences, the captain once again hears the song of the Borg Collective. Admiral Janeway is convinced that the Borg have been crushed and are no longer a threat. Picard knows that she is wrong, and if he doesn't act immediately, the entire Federation will be under the domination of its most oppressive enemy.

The Enterprise, including new counselor T'Lana (a decorated Vulcan), is assigned to mediate a conflict between the Repoki and the Trexatians. When she is introduced to Worf she snubs him to the surprise of other crew members. Picard tries to promote Worf as the ship's new permanent first officer but is shocked to find that Worf refuses. Worf had previously made a decision to keep is late-wife Jadzia Dax alive rather than complete his mission, Due to this decision an operative died and possibly thousands of Federation citizens were needlessly massacred. He did not believe himself worthy to take such a position after making such a decision.

Before the mission can begin, Picard begins receiving hearing Borg voices and suspects that a group of drones left stranded in the Alpha Quadrant are constructing a new queen. He contacts Admiral Janeway, who orders him to hold position and wait for Seven of Nine to arrive to assist. Picard is certain that if he waits, that the Borg will finish creating a new Queen and activate an enormous ship which could destroy Earth and later the federation. Picard faces notable resistance from his new councilor T'Lana but decides to proceed. He takes the ship to Sector 10, where they discover a dormant Borg cube. The new security chief Lieutenant Battaglia and Sara Nave (promoted to head of opps) enjoy a date together before Battaglia's dangerous mission.

Picard sends an away team to dispose of the Queen, but unknown to him, the drones have a natural instinct to protect the queen and they uncharacteristically kill with vicious violence rather than assimilate. Most of the away team are killed and Battaglia is assimilated.

Picard, to Crusher and T'Lana's dismay, decides to transform into Locutus to infiltrate the cube with a chip in his brain that allows some individuality. After his transformation Crusher informs him she is trying to find a way to chemically neutralise the queen. Picard beams to the cube and manages to walk uninterrupted to the queens chamber however before he can destroy her she wakes up and has him restrained. After refusing to join her willingly they remove the inhibitor chip in his brain surgically without any anaesthetic.

While Worf was ordered to not rescue the captain he decides to do so anyways. He and T'Lana discuss his plan and somewhat overcome their awkwardness with one another. He gets permission from Admiral Janeway to separte the saucer section from the ship and cloak the drive section to reach the cube unobserved. Crusher devises a method to neutralize the hormone that is used to create a queen.

Crusher, Worf, Nave and two other officers beam to the cube. While Work and Crusher fight their way to the queens chamber, the others are separated and fight against drones. Eventually Sara Nave discovers Battaglia and tries to rescue him. However he is no longer human and overpowers her. She manages to pull her over a railing dragging him with her so that they both die and not have to live as drones.

Work and Crusher struggle in the Queens chamber. Worf tries to restrain Locutus without killing him but is eventually overpowered and Locutus nearly kills Worf. Crusher is injured by the Queen but eventually manages to inject her with the anti-pheremones neutralising the queen and all other Borg.,

Picard manages to restore his humanity. Janeway is furious with Picard and threatens a possible court martial for disobeying orders. Worf decides to accept the permanent promotion as first officer.

As the second novel in the post-Nemesis TNG continuity, Resistance is one of a sequence of stories that do not reconcile well with the events established in Star Trek: Picard. In particular, the evolution of the Borg might not match details of the new canon series. 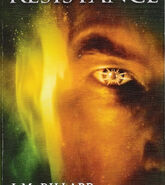 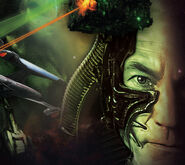 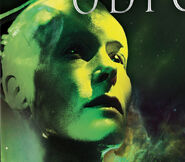 The novel is set in April of 2380. It begins five months after the final TNG movie: Star Trek Nemesis.