The Original Series No. 18

8293.6
All Scotty wanted was a little "rest and recreation!"

On shore leave at Starbase 7, Montgomery Scott gives an engineering lecture to a group of cadets. Afterwards he reacts angrily when they ask about his friends Spock and James T. Kirk, but soon regrets his brusqueness, reflecting that the former Enterprise crew's exploits have become legend. Scotty's old Starfleet Academy friend, Joshua Helmes, apologizes for missing his lecture. Now the commander of Starbase 7, he expresses bitterness over being confined to desk duty because of having lost his first command on a routine mission. Joshua tells Scotty that their mutual friend Bill Nygulla is also on Starbase 7, assigned to Supply, and suggests the three of them get together later to enjoy Nygulla's stash of alcohol. Scotty is then approached by Cadet Gulder, a young man carrying an armload of study tapes who wants to ask him a question about dilithium crystals. Scotty invites him to have a drink in the lounge, which Gulder isn't sure is allowed for cadets.

Down in supply, three men with phasers and wearing Starfleet uniforms burst in and kill everyone but Nygulla. One of them knocks Nygulla unconscious. They then erase the security video of the incident and remove two storage containers from the supply bay.

In the lounge, Gulder is continuing to ask Scotty technical questions. Scotty persuades the reluctant Gulder to drink alcohol for the first time. Despite his inexperience, he holds multiple drinks amazingly well and continues to ply Scotty with a stream of engineering questions. Thinking that the supply of liquor Joshua mentioned might relax the young man more effectively, Scotty takes Gulder down to supply, where he is shocked to see security guards and a medic treating the injury to Nygulla's head. Joshua explains that three men robbed the supply bay… of paper hand towels. Nygulla did not see the men well enough to describe them. Scotty leads Gulder away, vowing to find the men responsible.

Scotty accesses the supply inventory lists. He and Gulder learn that the starbase's regular paper towel supplier is on Earth, but that the stolen canisters were shipped from Narktos, a planet at the other end of the galaxy. Scotty suspects that the canisters did not contain paper towels at all. Unfortunately, Scotty and Gulder are overheard by one of the three robbers, a man calling himself Chandler. He contacts Walters to warn him of their danger.

In an observation area of the starbase, Walters is joined by a man whose identity is not revealed. Walters tells him that Scotty has been looking at the inventory lists and may soon figure out the whole truth. The other man tells Walters to kill Scotty if necessary, but that his own hands must stay clean.

Back in the supply bay, Gulder suggests to Scotty that they determine what might have come from Narktos that would be worth smuggling. Before they can do so, Chandler pushes a heavy storage container down toward Scotty. Gulder notices it falling and pushes Scotty out of the way. Scotty sees Chandler climbing down from the pile of containers and attacks him. He gets Chandler to admit that the paper towels were thrown away as trash. Someone else fires a phaser at Scotty and Gulder, shouting to Chandler to run. Scotty and Gulder hide between the storage containers until the danger passes.

Accessing the computer records again, Scotty and Gulder learn that no one named "Chandler" is assigned to Starbase 7. However, they also learn that Narktos is the source for barbit crystals, an extremely powerful form of narcotic. Finally realizing the full truth, Scotty takes Gulder to the waste disposal area, where he explains that the trash pit is the only place on the starbase where the crystals could be processed. Examining the ion-flow settings, Scotty realizes that the thieves' tampering is about to cause a chain reaction that will destroy the starbase.

As Scotty tries to correct the control settings, he and Gulder are attacked by two of the robbers firing phasers at them. Scotty shouts to them that he needs to reset the controls to prevent the starbase from blowing up, but the robbers do not believe him, thinking he merely wants to destroy the crystals. Scotty asks Gulder to distract them. Gulder sneaks behind the two men and loudly drops a wrench to lure them away. As Scotty continues to reset the controls, the third robber, Walters, pulls a phaser on him. Suddenly, Walters is struck from behind by a phaser blast. Scotty turns back to the controls as the other two men advance on him, phasers blazing—until they, too, are shot from behind. Scotty averts the explosion with no time to spare.

Joshua Helmes appears, saying he saw the attack on Scotty and was fortunate to be able to shoot the three attackers. For a moment, Scotty is grateful—until he realizes Joshua killed the men, rather than stunning them, to prevent them from implicating him in their plot. Joshua admits he wanted revenge on Starfleet for being denied starship command due to a single mistake in his youth. He is about to kill Scotty when Gulder grabs him from behind, knocking the phaser out of his grip. Scotty looks at his old friend, lying on the floor in front of him, with pity and anger. 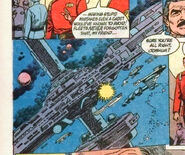 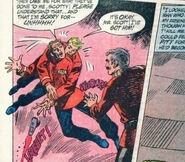