The Next Generation No. 1

42305.7
"Return to Raimon" was a comic, the first issue of the DC Comics ongoing series of TNG comics, released in October 1989.

TNG Magazine
Captain Picard receives a formal invitation to the Death Celebrations of the Primarch of Raimon. On that planet, the demise of an individual is celebrated before the event. Captain Picard becomes entangled in Raimonian politics and intrigue when he receives an urgent message in the dead of night...

Captain's log, stardate 42305.7
We are establishing a standard orbit around the planet Raimon, where the inhabitants have an interesting attitude about death. When a Raimonian learns that his death is imminent, he calls for a fathering of his peers to mark the event. But the gathering takes place before his demise -- not afterward as in most cultures. What's more, the event is anything but solemn. In fact, it's a fairly extravagant celebration -- with the dying one in attendance as guest of honor. The Primarch of Raimon, the most important political figure on the planet, has called for his death celebration. As is customary, it will culminate in a public reading of his last will and testament. Since the Federation has long enjoyed a mining treaty with Raimon, thanks to the indulgence of the Primarch and his forbears, we have been asked to send a party of representatives to the celebration. And, of course, to the reading of the Primarch's will as well. As my presence has been specifically requested, I will lead the diplomatic contingent.

The Primarch of Raimon, Sarlis Gaspadral, believes that his death may be imminent. As per Raimonian custom, there will be a death celebration - an extravagant celebration culminating in a public reading of his last will and testament. Since the Federation is in a very beneficial mining treaty with Raimon, they are sending Captain Jean-Luc Picard as a diplomatic envoy to the occasion. While serving on the USS Stargazer, Picard attended the death celebration of the previous Primarch and his presence has been specifically requested by the current Primarch.

Geordi La Forge and James McRobb watch Worf exercise by fighting and easily defeating a hologram in single combat. After Geordi and Worf leave, McRobb injures himself attempting to use the same holodeck program.

Meanwhile, Picard, Riker, and two security officers beam down to the death celebration. Lord Tardol, a political enemy of the Primarch, recognizes Picard and is surprised that he would dare to show up. Tardol indicates that Picard may not be as welcome as he thinks he is.

Lutina Gaspadral, the Primarch's daughter, is overjoyed to see Picard although he barely recognizes her since she was only five years old on his previous visit. Since Picard's last visit, she has been wearing a model of the Stargazer that Picard gave her around her neck.

Meanwhile, some of the crew are discussing their surprise at Picard mentioning that he admired a five-year old while Counselor Troi tries to cope with Data's being in command, whom she cannot sense emotion from.

On the planet's surface, just as Riker leaves Picard for the night, a messenger arrives claiming that he was ordered to bring Picard to the Primarch for a secret meeting. Picard enters alone and finds that the Primarch has been murdered. He sees a shadow fleeing from the scene and chases down Lord Tardol just as the Primarch's security forces find the two of them and have them both arrested for murder. 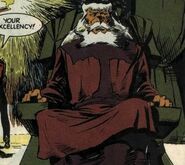 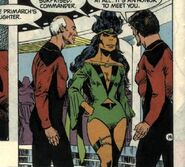 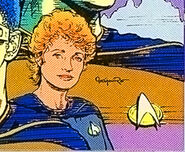